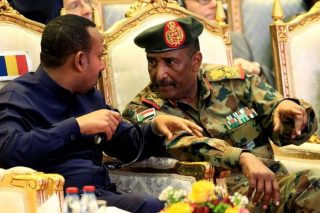 Sudan and Ethiopia to collaborate towards a peaceful border

On Saturday, May 30, 2020,  the government of Sudan summoned the Ethiopian chargé d’affaires (acting Ambassador), over an alleged attack in the eastern Gedaref State by suspected Ethiopian militia over the past week. Condemning the occurrence, the Sudanese Ministry of Foreign Affairs called for a truce.

The move was necessitated by a cross-border incursion in Al-Baraka on Thursday which led to the death of a child and a Sudanese soldier. The army also stated that 6 of its men were injured during the attack.

Reacting to the sad occurrence, Ethiopia called for a peaceable resolution to the border tension. The Ethiopian Foreign Ministry urged the two countries to work together through existing military mechanisms in order to address and jointly investigate circumstances surrounding the incident.

Furthermore, the Ministry maintained that it “strongly believes that there is no honourable reason for the two countries to descend into hostility and calls for the need to continue the close collaboration between neighbouring local and regional administrations to ensure peace and security in the border area.” This statement was made with an aim for both countries to work out modalities to contain the situation and avoiding any further tension.

Terrorism gained a safe haven in Sudan during the leadership of its ousted President, Omar Hassan Ahmad al-Bashir who ruled from 1989 – 2019 (30 yrs).  In 1989 the National Islamic Front seized power in Sudan and set out to build an Islamist state, which became home to radical Muslim groups from all around the world.

During the 1990s, Sudan fully provided a safe haven to terrorists including Osama bin Laden and al Qaeda and acted as a gateway for these groups to operate in the greater Horn of Africa region. While Gedaref State borders Ethiopia, the region usually experiences a series of attacks, especially during harvest seasons.