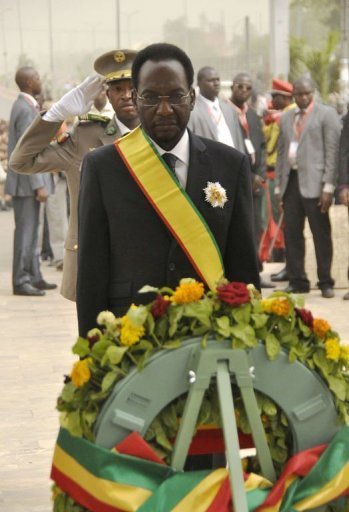 Staggering Mali Swear In Interim Civilian President, But What Next?

Three weeks after a record-shattering putsch that destabilised one of Africa’s hitherto most stable democracies, Mali on Thursday swore in a provisional president, in a move that marks the dawn of the country’s official return to democracy.

Supreme Court President, Nouhoum Tapily, swore in Dioncounda Traore, who was speaker of the National Assembly until the March 22 coup, at a concise ceremony in the capital city of Bamako.

Although constitutionally mandated to serve only 40 days in office, leaders of the regional mediating Economic Community of West African States (ECOWAS) have tacitly acknowledged that Traore may be entitled to a lengthier stay in office, as he is confronted with the daunting task of organising new elections in a country whose northern half is already firmly in the grip of Tuareg-led rebels and Islamist cohorts.

The putsches had claimed to have seized power in protest of Toure’s mishandling of the rebellion in the North, but it was only after his ousting that the Tuareg rebels succeeded in taking the three largest cities in the region — Kidal, Gaol and Timbuktu — and declaring an independent state of Azawad.

Mali’s return to constitutional order was literally enforced on the Captain Amadou Sanogo-led military junta by ECOWAS, which instituted a number of stringent trade and border sanctions against the landlocked country.

After an initially adamant Sanogo caved in, long time president, sixty-three-year-old Amadou Toumani Toure, who was only months away from stepping down, emerged from hiding on Sunday to tender his official resignation in a highly publicised meeting with mediators, attired in a flowing white robe and a traditional fedora, and looking calm all through.

“I am doing this without any pressure, in good faith, and it is especially out of love for my country that I have decided to hand in my resignation letter,” he had said.

Dioncounda, the new president, had himself fled into exile after the coup but returned to the landlocked country on April 7, after learning of Sanogo’s concession to temporarily cede power to the head of parliament.

Gratifying as the temporary return to democracy is, its significance is only dependent on the new president’s handling of the rebellion in the North, an area the size of France.

President Traore’s blistering declaration of a “total and relentless war” against the rebels at once heightens fears of mayhem in a region already traumatised by drought and critical food shortage. ECOWAS is itself mulling military crackdown with a supply of 3,000 soldiers.

Pathetically, matters of northern rebellion, total war and transitory presidency ordinarily ought to be the least problems of a country rated as the world’s fifth poorest by the Human development index of the United Nations Development Programme (UNDP) — one where the average worker earns a paltry $1,500 annually.

A country once famed as one of Africa’s top-three traders of gold ideally has no business with poverty. Yet, its escape from the base of the wealth pyramid hangs on events of the coming weeks: a war that will inescapably plunge it into further abyss, or a rare peace that will bring a real chance of a rewarding shot at economic stability.