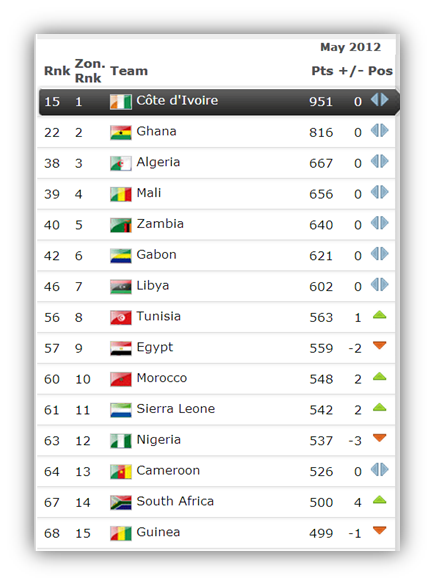 It was a case of mixed emotions for several African countries when the latest FIFA ranking was released on Wednesday.

Africa’s top team, Cote d’Ivoire, maintained its status as Africa’s number one team with its 16th rank, dropping one position from last month.

Ghana is second on the continent but dropped three places to 25th in the world ranking while Algeria maintained their 3rd place.

The biggest casualty however is African Champion Zambia who drop out of the continent’s top 5 after their loss to Sudan in last week’s World Cup qualifiers. The Southern African nation is now 6th in Africa and 43rd in the world.

Zambia’s place on the top 5 was taken by Libya who moved up four places to be placed 4th in Africa and 42nd in the world.

Nigeria- after their slim 1 : 0 win over Namibia- was one of the gainers as they moved up three places to 60th in the world and 11th in Africa.

Here is the list of top 20 African countries and their world ranking: