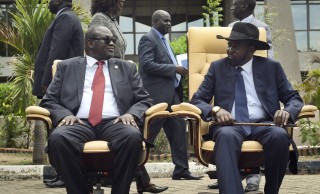 The main protagonists of the South Sudan crisis, President Salva Kiir and opposition leader, Riek Machar have both committed to forming a unity government by mid-November. This is in line with the original plan of a peace deal signed over a year ago to end the deadly civil war.

Following the secession from Sudan in 2011, the country plunged into conflict in 2013 after Kiir accused Machar, whom he had previously sacked from his post as vice president, of plotting a coup against him. The ensuing violence has killed about 380,000 people and displaced more than four million – almost one-third of the population.

“The parties discussed minor issues and the principals agreed to establish a transitional government by 12th November,” Information Minister, Michael Makuei Lueth, said on Wednesday after Kiir and Machar met for over three days in Juba. Machar’s rare visit to the capital city – the first this year – comes before a November deadline to form a power-sharing administration.

The formation of a transitional government is a key part of the deal agreed on by the rivals to end the conflict that has wrecked the economy. South Sudan also aims to hold elections after a three-year transition period.

Several disputes had delayed the implementation of the ceasefire deal, signed in August 2018. Particularly, the government claimed it did not have enough money to fund disarmament and the integration of former rebels into the army.

According to officials, the latest meetings were aimed at ironing out outstanding issues. And both leaders reportedly discussed constitutional amendments, security laws and the number of regional states that the country should have. Both Kiir and Machar said their talks went well, without providing further details.

Observers have said a political deal between the rivals is the only way to move forward with the 2018 peace agreement, even as rebel groups not a party to the peace deal have continued fighting in different parts of the country.

Despite the ceasefire holding in many regions, the International Committee of the Red Cross said that violence remained pervasive. The aid organization continues “to treat a large number of patients with gunshot wounds,” it said in a statement this week.

Moreover, millions of South Sudanese remain displaced as the country braves a humanitarian crisis, a joint report by a host of top charity organizations says. After five years of brutal conflict, more than seven million South Sudanese, over half the population, are in need of humanitarian assistance.

Women, who are the vast majority of displaced households, may be especially vulnerable, including facing the threat of sexual violence. And while some refugees have begun returning to South Sudan, the report says that many are not going back but seeking a safer and better place to live.

Doubts remain over whether the peace deal will hold for long despite the renewed commitment to stick to the given deadline. With recurring clashes in some regions, increased fighting among armed groups and alarming levels of sexual violence against women and girls, the situation in South Sudan remains fragile.