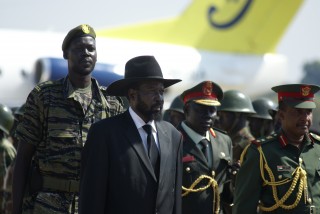 South Sudan fails to set up a transitional unity government. What this could mean for the 8-year-old country.

South Sudan rival leaders have again missed a deadline to form a transitional unity government. The United States on Wednesday said it was gravely disappointed in South Sudan’s inability to meet the November 12 deadline.

President Salva Kiir and rebel leader Riek Machar had agreed two months ago to establish a transitional government. The inability to keep to the deadline raises new concerns for a fragile peace process in a country devastated by years of ruinous civil war.

It is the second time that an extension has been granted following the signing last year of the latest peace deal between warring sides amid pressure to end the five-year-long conflict that has killed hundreds of thousands of people and displaced millions of others. The parties agreed to establish the government in time, but has failed to do so.

Signed in the Ethiopian capital, Addis Ababa, in September 2018, the Revitalised Agreement on the Resolution of the Conflict in South Sudan provided for the rebels to join the transitional government and the settling of a number of disputes, including the number of regional states the country should have and their boundaries.

As part of the agreement, which ushered in a ceasefire, forces from the warring sides were also meant to be registered and merged to form a national army of more than 80,000 soldiers, which was supposed to be followed by Machar’s return from exile.

While the integration of the forces has not happened, the rebels have accused Kiir’s government of failing to disburse the $100m it had pledged for the implementation of the deal.

In a meeting last week, mediated by Ugandan President Yoweri Museveni and Sudan’s interim leader Abdel Fattah al-Burhan, Kiir and Machar agreed to push back the formation of the new administration by 100 days. It was made known that issues relating to security arrangements, governance and the integration of fighting forces were still not fully resolved

It is therefore advisable that the leaders finalize and become a transitional unity government. Failure to do so could amount to another civil war in the country. Another civil war in South Sudan will have major repercussions on the already struggling economy. The economic future will largely depend on the outcome of the civil war and its substantial proven oil reserves.

It could also result in several consequences for the country such as sanctions from the US and other bodies. It is a common knowledge that once a country has been sanctioned, its doors are closed to foreign investors or loans, thereby having an adverse effect on the economy.

A unity government is a precondition for South Sudan to hold elections after a transition period of three years, and any additional delay will likely torpedo the plan for a vote in 2022.

South Sudan became the world’s newest country in 2011 when it split from Sudan after decades of civil war. However, two years later it plunged into conflict after Kiir accused Machar, whom he had previously sacked from his post as vice president, of plotting a coup against him.

The U.S. State Department spokeswoman Morgan Ortagus said in a statement, that the United States would also seek “to establish a new paradigm to achieve peace and a successful political transition in South Sudan” with others in the region.