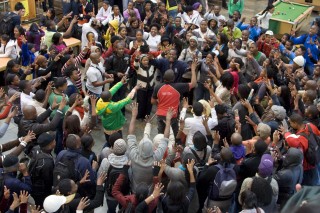 Data revealed on Tuesday, June 23, shows a record hike in South Africa’s unemployment rate at the first quarter of this year, exposing weaknesses in the economy even before the coronavirus pandemic.

Statistics South Africa’s quarterly labour force survey shows that unemployment rose from 29.1 percent in the last quarter of 2019 to 30.1 percent. This has left 7.1 million people without jobs in the first quarter, up from 6.7 million in the previous quarter.

“This is the first (time) ever that we have hit the 30% mark,” Statistician-General Risenga Maluleke said.

Before the coronavirus outbreak, South Africa’s economy was already in recession due to the lack of electricity output. Key sectors including the agricultural sector laid-off workers as part of a restructuring plan to keep it afloat.

Due to the ongoing pandemic, the country’s economy has suffered a downturn further stretching businesses and consumers. Extensive power cuts and excess shedding in December last year had forced big plants and mines to reduce production.

The South African Reserve Bank has warned that annual economic growth will remain as low as 1 percent a year as long as Eskom’s power problems persist.

According to the World Bank, the government offered no significant assistance during the pandemic to the informal sector in which 25-30 percent of South African’s fall.

Subsequently, the rise in unemployment could create more problems for the country and increase the crime rate and inflation. The issue of unemployment has become a matter of emergency for South Africa and should be treated as such.