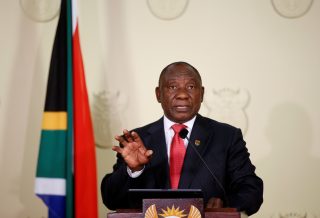 On Tuesday April 21, Congress of South Africa’s Trade Union (COSATU) called on the government, companies and financial institutions to generate a minimum of 1 trillion rand ($53 billion) economic stimulus plan, in order to reduce the effect of the coronavirus (COVID-19) pandemic.

South Africa’s President Cyril Ramaphosa has been consulting on ways to mitigate the impact of the virus through COSATU, which is one of the main partners of the governing African National Congress and sits on the National Economic Development and Labour Council.

“We need a massive stimulus plan which can’t just be public funds. From the government side, there could be tax interventions, a scaling-up of social grants, but private firms including the banks should match every cent,” he said.

According to Parks, raising the budget deficit beyond a 6.8 percent of gross domestic product (GDP) projection in February was a great risk taken by the government, given that half the country could be out of work without appropriate action.

However, some business leaders interviewed by Reuters agreed that there needed to be a significant increase in stimulus measures, but thought the figure of 1 trillion rand, equivalent to roughly 20 percent of South Africa’s 2019 GDP, was too high.

So far, South Africa has the highest number of confirmed cases in sub-Saharan Africa, at 3,300, with 58 deaths, as of Monday.

Following the demand made by the union, president Ramphosa announced on Tuesday evening a R500 billion ($26bn) stimulus package to deal with the effect of COVID-19. The money would come from its adjustment budget, the Unemployment Insurance Fund and multilateral institutions.

The funds will be used to implement a health budget in responding to COVID-19, ensure relief of hunger and social distress in the country, support companies and workers, as well as map out the gradual re-opening of the economy.

In implementing an economic recovery strategy, the government will embark on measures to stimulate demand and supply through interventions such as a substantial infrastructure build programme, the speedy implementation of economic reforms, the transformation of the economy and embarking on all other steps that will ignite inclusive economic growth.

Highlighting other areas the funds will be allocated, the president said that R20 billion will be used to first address health responses to COVID-19. If successfully managed, the anticipated surge in cases will be reduced and everyone who needs treatment receives it. It will also provide additional expenditure on personal protective equipment for health workers, community screening, an increase in testing capacity, additional beds in field hospitals, ventilators, medicine and staffing.

More so, an additional funding of R20 billion will be made available to municipalities for the provision of emergency water supply, increased sanitization of public transport and facilities, and providing food and shelter for the homeless.

The government has also put in place measures to protect the wages of workers in the formal economy and have extended support to small, medium and micro-sized businesses, millions of South Africans in the informal economy and those without employment who are struggling to survive.

To reach the most vulnerable families in the country, the government has decided on a temporary 6-month Coronavirus grant. It will direct R50 billion towards relieving the plight of those who are most desperately affected by the coronavirus.

In addition, a special Covid-19 Social Relief of Distress grant of R350 a month for the next 6 months will be paid to individuals who are currently unemployed and do not receive any other form of social grant or UIF payment.

Furthermore, the South African Social Security Agency (SASSA) will within days implement a technology-based solution to roll out food assistance at scale, through vouchers and cash transfers to ensure that help reaches those who need it faster and more efficiently.

In addition, to fill the immediate need, the Department of Social Development has partnered with the Solidarity Fund, NGOs and community-based organisations to distribute 250,000 food parcels across the country over the next two weeks.

In dealing with the issue of unemployment, the government has set aside an additional R100 billion for protection of jobs and to create jobs. R40 billion has been set aside as income support payments for workers whose employers are not able to pay their wages.

For SMMEs, spaza shop owners and other informal businesses, over R100 million has been set aside to render assistance in form of loans, grants and debt restructuring

In addition to existing tax relief measures, the government will introduce a 4-month holiday for companies skills development levy contributions, fast-tracking VAT refunds and a 3-month delay for filing and first payment of carbon tax.

Other forms of support have been extended to artists, athletes and technical personnel, as well as to waste pickers and public works participants in the environment sector.

If properly implemented, the stimulus plan will be able to address the needs of the people, and stabilize the economy amid the COVID-19 pandemic.