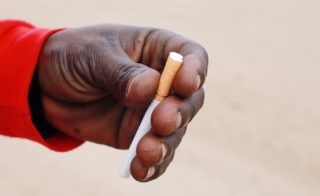 Tobacco use in South Africa is increasing at an alarming rate, reflecting a broader trend on the continent. Worse still, Africa’s growing illicit tobacco trade is proving to be a major part of the problem, pushing smoking rates up thanks to substantially lower prices.

According to new research, as many as one in five South Africans over the age of 15 years old report being a daily cigarette smoker. This amounts to more than 8.6 million smokers in the country, all living with nearly double the risk of experiencing a stroke and four times the risk of contracting heart disease. In fact, tobacco-related diseases kill more than 42,000 South Africans on an annual basis.

While the South African government has adopted a range of tobacco control measures, authorities have also made critical mistakes along the way – mistakes that could cost millions of lives in the long run.

Indeed, South Africa’s tobacco control track record has been a mixed bag, with a strong excise tax regime and illicit trade investigative capacities in the 1990s and early 2000s giving way to a decade of shunted progress. More recent improvements, too, have ultimately been undermined by disastrous policy decisions contributing to a spike in the illicit tobacco trade.

Cigarette excise taxes in South Africa increased fivefold between 1994 and 2009, seeing cigarette retail prices nearly triple for consumers. Despite rising prices, the size of the illicit tobacco market remained below 5% during this period. Combined with the introduction of tobacco control legislation, South Africa’s smoking prevalence plummeted from a third of the population to less than one-fifth.

The erosion of South Africa’s revenue services’ investigative capacity after 2009, however, ushered in an explosion in the illicit tobacco trade. Between 2014 and 2018, the country disbanded specialized units tasked with investigating the tobacco industry. As a result, the size of the illicit tobacco market grew from less than 5% in 2009 to around 17% in 2015, and more than doubled to 30% by 2017. Worse still, ensuing efforts to undo this damage were swiftly undermined by policy decisions made at the onset of the Covid-19 pandemic; namely, the 2020 smoking ban which saw the illicit tobacco trade thrive.

With the illicit trade flourishing, South Africa must take bold steps to quash the market. Crucially, this includes ratifying the World Health Organization (WHO) ITP Protocol and abiding by international standards in rolling out a tobacco industry independent track and trace system.

Failure to implement effective track and trace has cost South African authorities critical time in combating the country’s worsening tobacco crisis, with its efforts to develop a workable solution repeatedly thwarted by the tobacco industry in recent years. Discouragingly, the current head of the South African Revenue Service (SARS) himself, Edward Kieswetter, has previously stated that a track and trace system “may or may not” be required. Moreover, he has halted the tender process to develop a track and trace system until further notice.

Authorities cannot afford to repeat previous failures to manage “risk across the entire supply chain” – especially since solutions to the issue already exist. For example, other African countries have implemented systems such as the Sicpatrace system developed by Swiss security firm Sicpa, which uses a combination of physical and digital stamping technologies allowing tax and customs authorities to monitor products at each stage of the supply chain. This system generates unique identifiers beyond the reach of smugglers, which has helped curb smuggling and boost tax collection in over 15 countries, including Kenya, Togo and Tanzania. Importantly, Sicpatrace is among the solutions providing complete independence from the tobacco industry, helping to ensure reliable intelligence to effectively counter the illicit trade in line with WHO best practices.

Interventions such as these are critical, not least given the impact of the illicit tobacco trade on South Africa’s post-Covid economic and public health recovery.

The government’s misguided Covid-era tobacco ban caused a gap that was quickly filled by illicit tobacco, which shot up to overtake licit tobacco, accounting for over half of the market. During this period, the government is estimated to have missed out on up to $500 million in lost excise taxes on tobacco products while some three hundred thousand jobs vanished. More broadly, its revenue service has been losing an annual estimated R8 billion to R19 billion (roughly $462 million to $1.1 billion) in tax revenue to the illicit tobacco trade in recent years – crucial funds which could otherwise be invested in bolstering beleaguered public health services reeling from the pandemic and facing rising tobacco illness-related costs.

In addition to causing massive losses to government tax authorities, legal businesses and jobs, the illicit market is also fueling organised crime, stretching law enforcement agencies to their breaking point. As recommended by ENACT Africa, an organisation specialised in tackling transnational organised crime, South Africa must enhance cooperation between its law enforcement and tax authorities as well as with those of the broader region while increasingly pursuing and strongly penalising the producers of illicit cigarettes rather than simply street-level traders. This improved action will help protect South Africa’s recovering economy from the pernicious effects of the illicit trade while supporting public health and cutting off a major revenue stream for criminal groups.

The smoking scourge overtaking large parts of Africa has not spared the continent’s southernmost country. With tobacco consumption and the illicit trade both flourishing in South Africa, authorities must take urgent action before significant damage is done to public health and budgets as well as the licit economy. If the government is unable to face the issue of illicit tobacco head-on with all available tools, it is future generations of South Africans who will ultimately pay the price.