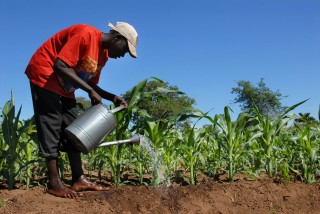 South Africa’s economy missed expectations, as its gross domestic product grew narrowly by 0.2 percent in the third quarter of 2016. This is after the country had earlier escaped a recession with an impressive turnaround growth of 3.3 percent.

The agricultural sector had a negative growth of 0.3 percent in 2016 third quarter GDP results. This sector, along with forestry and fishing, manufacturing, electricity, gas and water, and trade, catering and accommodation were the sectors responsible for the economy’s contraction.

Right now, South Africa is suffering from drought. According to the South African Weather Service, the country’s average rainfall for 2015 was the lowest since 1904. The agriculture sector contributes about 1.6 percent to South Africa’s gross domestic product (GDP). Its GDP contribution is below the 2.2 percent contribution that is needed for the sector to remain sustainable,” said Dr John Purchase, CEO Agricultural Business Chamber (Agbiz).

The decline is largely as a result of the decrease in horticulture products. Horticulture is largely dependent on irrigation and has been badly affected by the decline in the quantity of rainfall. Livestock under extensive production systems have also been severely affected because they have been largely reliant on grazing. The drop has led producers to prune their stock while causing others to forcefully reduce their herds.

An estimated 5 million tonnes of grains such as maize and wheat have been imported in 2016 costing South Africa 22 billion rands. The increase in imports would likely shift the country from a net exporter of maize and sugar to a negative net trade position in 2016.

Over 2.9 million households depend on agricultural production in South Africa and it is likely that food security would be severely affected in the future. Given the current shortages, it is expected that there would be a hike in food prices. South Africa would have to increase its import to meet the country’s demands. Increased imports will cause the rand to weaken.

Paul Makube, Senior Agricultural Economist at FNB, explains that the price hikes for certain food commodities will, however, be constrained by affordability, given consumers’ reduced disposable incomes and debt pressures. The continued political uncertainty surrounding President Zuma who is crippled by the accusation of corruption remains a huge risk.