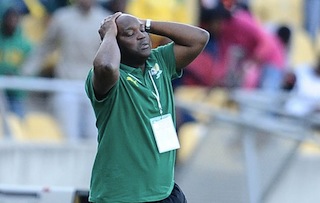 South Africa’s national football team Bafana Bafana will play under a new coach when they take on Botswana in their next World Cup qualifiers.

This is because the South Africa Football Association (SAFA) confirmed on Tuesday that coach Pitso Mosimane had left the national team job and will not be taking charge of Saturday’s encounter.

In a statement on Tuesday, SAFA CEO Robin Peterson said: “drawing in the last fifteen minutes of the game made us realise we had to act now.”

Assistant Stephen Komphela is now expected to take charge of South Africa’s next two games against Botswana and Gabon.

Nonetheless, despite not being the one to lead the team for it’s next two games, SAFA spokesman Dominic Chimhavi insisted that Mosimane had not been sacked.

“There are procedures that need to be taken… He (Mosimane) has not been sacked.”

Coach Mosimane was appointed to take over from Brazilian Carlos Alberto Perreira after the 2010 World Cup after serving as the Brazilian’s assistant.

However, his tenure has been under threat following miscalculations, resulting in South Africa missing out of the 2012 African Cup of Nations (AFCON).

His team had started celebrating on the pitch after thinking a draw in their last AFCON qualifiers was enough to see them qualify.

But a change of rules that the Confederation of African Football had initiated saw Niger beating Bafana Bafana to the ticket- a moment of national embarrassment.