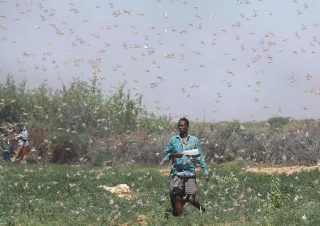 Somalia’s government on Thursday, May 14, 2020, deployed helicopters to spray the thousands of new desert locusts swarms that are eating crops and threatening the country’s fragile food supply.

Somalian Minister of Agriculture Sa’id Hussein Iid, revealed that the spraying is funded by the U.S. Agency for International Development. In an interview with VOA, Iid said that “hired Canadian experts will engage the swarms by spraying bio-organic pesticides from the air, using three helicopters.”

According to Iid, the aerial spraying will focus on areas in the central Somali region of Galmudug, Puntland in the northeast, and the self-declared republic of Somaliland. Prior to now, Somali Minister of Agriculture stated that, “we have been conducting hand-spraying and using machines mounted on vehicles, but we have realized that is not enough to fight with the pest and avoid devastation to our pasture and agricultural land.”

According to the United Nations Food and Agricultural Organization (FAO), desert locusts can travel up to 150km in a day and each adult insect can eat its own weight in food daily. In February, the pests travelled to Somalia and were seen flying over land used for grazing animals in a remote part of Somalia, forcing the country to declare a national emergency.

Experts asserted that the desert locust invasion ravaging East Africa is the worst the region has seen in at least 25 years. Early this year, after extreme rainfall that created favourable breeding conditions, swarms of desert locusts from the Arabian Peninsula began rampaging across East African countries. Consequently, billions of desert locusts have already chomped their way through much of the region, including Ethiopia, Somalia, Kenya, Djibouti, Eritrea, Tanzania, Sudan, South Sudan and Uganda.

Just like Somalia, other countries in the East African region have taken numerous measures to prevent the pests from increasing in number and breeding new swarms. Earlier this week, neighbouring Ethiopia also began aerial spraying locust-infested areas, leaving millions of the pests dead on the ground. However, Zebdios Salato, the top advisor in the crop protection department at Ethiopia’s Ministry of Agriculture said: “total eradication will not be possible, but we can scale up the control operation.”

Similarly, with over 20 counties infested by the desert locusts in Kenya, the nation’s authorities began aerial spraying earlier on to avoid the threat it posed to food security. Aerial spraying which helps create a more uniform spray pattern is often more effective than ground application. It is faster, covers a longer distance, and does not damage the soil while destroying pests with the use of ground equipment.

The COVID-19 pandemic has complicated efforts to fight the locusts, mainly by delaying deliveries of pesticides and personal protective equipment in recent weeks, the FAO says. Nevertheless, with the ongoing aerial spraying in Somalia and other East African countries, the dreaded desert locusts will be exterminated in the nearest future.