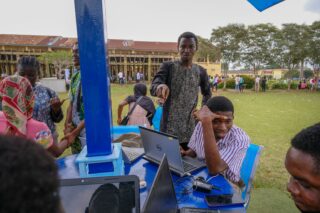 Bolu Abiodun attended a federal university; his alma mater is in a remote town in one of Nigeria’s South-Western states, so he understands the numerous challenges students face in tertiary institutions. One of the challenges he faced as an undergraduate was the inconsistent power supply and internet connectivity. “To have an internet connection, you may have to stay in odd places and compete with birds in their arboreal abode. To power our gadgets after a stressful day at school, the over 17,000 student populace at the time was often vulnerable to nocturnal vices. There were several cases of battery, theft, and even sexual assaults,” Bolu explained. The situation was so bad, that students often protested. In one of such protests, two students of the institution died, and many others were injured as the protest clashed with the visit of a politician. Sadly, that did not change anything; erratic power supply and poor internet issues persist.

These problems are not peculiar to Bolu’s alma mater; they are present in all Nigerian tertiary institutions, especially government-owned institutions. The reason is not far-fetched; Nigerian tertiary institutions have an ugly history of being heavily underfunded. Nigeria’s 98 public universities are chronically underfunded, and this often leads to strikes by lecturers. The Academic Staff Union of Universities (ASUU) is presently on strike to protest the government’s failure to meet its financial demands. The consequences of a lack of funds manifest in different ways, one of which is a lack of adequate and high-quality infrastructure.

In 2017, the United Nations said about 65 per cent of public primary and junior secondary schools in Nigeria did not have electricity and consequently cannot guarantee technology-based education. Higher institutions are not any better. It’s 2022; still, universities depend on supply from the national grid for power, and in the space of twenty-five days, the national grid has collapsed three times. This jeopardises student learning, research, and institutional and administrative operations. A young innovator, Oluwatobiloba Oyinlola, recently nominated for the Royal Academy of Engineering Africa Prize solves these problems through his innovative Solar Pocha, an outdoor workstation and solar-powered space where students can connect to the internet and off-grid electricity.

Oyinlola, a telecommunications graduate from Tai Solarin University of Education (TASUED), is popularly known among his peers as the Internet of Tobi, a moniker he still proudly bears today. With over a decade of experience in the IoT field, Oyinlola has built IoT devices for startups and freelanced on groundbreaking projects like Elon Musk’s Hyperloop project – one of his breakthroughs in the engineering field. The team he was part of, built the flight control and the battery management system for the Hyperloop, a high-speed transportation system that could have a speed range of 760mph, more than an aeroplane of 500mph.

In 2019, the French government chose Oyinlola as an exceptional talent to join a program to create innovations that would solve everyday problems. The program, Hive at the camp, spanned a year with twenty outstanding innovators from all over the world in attendance. In one of the weekend explorations, a hackathon outside their main project, Solar Pocha was created in three days in line with a project for a smart city. In his second year as an undergraduate, Oyinlola had a series of bad experiences trying to charge his phone and connect to the internet. “I once lost my phone while charging at a business spot for N50. I looked away for a few seconds, and someone stole my phone,” he said.

That memory of that experience prompted him to suggest the idea of a mobile autonomous workstation within the camp. He and five other collaborators from South Korea, India, and America built and designed the ‘Solar Pocha’ – a fusion of the word ‘Solar’ and Pocha, which in South Korea means a place where people sit together to do anything. To make it autonomous, the team needed a lot of AI devices, which wasn’t going to be an easy task since they had three days to build. “Imagine building in three days. It wouldn’t be perfect, but it would work,” Oyinlola stated.

After completion, he thought about bringing the idea to Nigeria and making it a solution for schools, restaurants, parks, etcetera. But when he got to Nigeria later that year, he had no clue what materials to use or how to make the needed materials in the country. He started connecting with local suppliers and artisans like welders in Ibadan, where he grew up. For four to five months, he worked with them to create a prototype, after which he sought partners that would help him source and get essential materials like solar panels and inverters.

Oyinlola was unsure if his alma mater, TASUED, would welcome his innovation, but he had alternative plans. “I still had to work on the IoT feature, booking management, and the dashboard, among other things. I wanted it to be fully ready, but If TASUED says they are not ready for it, I will reach out to neighbouring schools like Covenant University, LAUTECH, or the University of Ibadan. I planned to deploy it in whichever school was willing to collaborate,” Oyinlola said.

Fortunately, when he finished the pilot model, TASUED welcomed it and had it deployed during the Coronavirus pandemic. The school was supportive. They provided Oyinlola with an API – where he could build the booking management system. Students book the workstation through the university portal and are assigned a seat for a maximum of two hours a day. “The Wi-Fi and the booking management systems are synchronized so that the time starts once the student logs in. The socket automatically comes on too. When the allotted time elapses, the socket and Wi-Fi shut down by default,” Oyinlola explained.

Currently, there is only one workstation for over 23,000 students, hence the circumscribed time limits. Oyinlola hopes to scale and initiate his ideas for versions 2 and 3 of the outdoor workstation with more funding. According to him, the updated versions can be used by entrepreneurs and for public events. Event organisers can borrow the mobile workstation for a few days. “Foremost Nigerian newspaper outlet, the Vanguard, plans to have one deployed to them. This workstation differs from other hubs in that users do not need authorization. A unit can also be deployed in large shopping malls for people who have urgent meetings when shopping. There will be some form of IoT where the door only opens to you after a scan,” Oyinlola said.

Funding remains a challenge for Oyinlola. He bootstrapped to build version 1 of the Solar Pocha and got materials from some supportive partners. Someone also gifted him a solar panel, and the school provided a conducive environment for him to build. However, he can only scale with more funding and grants.

Initially, student sensitization was also a challenge. Since SolarPocha was deployed during the pandemic, when the students were off-campus, they resumed with little knowledge of what to do with the workstation. Some tampered with the socket in trying to figure out how it works. This prompted Oyinlola to create a video tutorial on how to use the station.

Although the Solar Pocha is only operational in TASUED presently, Oyinlola has plans to expand to other tertiary institutions in Oyo State, Lagos, and Ogun state. He also has a client in the UK who is interested in deploying a unit for health-related purposes in Kenya. “We are flexible with location and with people interested in collaborating. We simply need to raise funds to be able to upgrade and deploy more stations, beginning with Nigeria,” Oyinlola explained.

Oyinlola is grateful for his growth in the tech ecosystem and how he has kept the Nigerian flag flying on foreign shores. He has perfected his skills as an IoT expert to the point of being acknowledged by super-talented people outside Nigeria who describe his skill set as top-notch. “When you get that international recognition, you know you’ve arrived at a turning point in your life. I have represented Intel to speak about topics at conferences meant for esoteric people in the world of developers. When your skill is tested at such a level, you know that you are a global champion.”