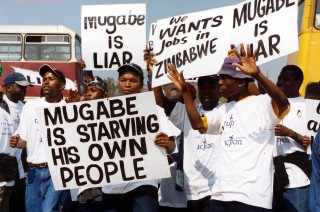 Heroes’ day is a special holiday for Zimbabwe as it is with several other countries. It’s the day chosen to honour the heroes of the nation; individuals who have done something great or sacrificed their lives for the nation. Over the Heroes Holiday which held on Monday this week, President Robert Mugabe called-out Britain for keeping the skulls of some of Zimbabwe’s early heroes, citing it as “the highest form of racist moral decadence, sadism and human insensitivity.”

Following his speech, Zimbabweans took to social media to lament the state of the country’s economy as an estimated 18000 workers were laid off their jobs the past week. A certain Munyaradzi Mugomeza reached out to Zimbabwe’s Minister of Higher & Tertiary Education, Jonathan Moyo, on Twitter. The young man pleaded that the government should focus on the economy, rather than on remains of early heroes. The reply he got was a shocker. “How can we focus on the economy when the skulls of Mbuya Nehanda & Sekuru Kaguvi are displayed in a British Museum?”

This tweet angered quite a number of Zimbabweans, and rightly so. Is this the stance of the entire government? Jonathan Moyo is no ‘ordinary citizen’, he is a minister – a representative of the government. Is it possible that the government value age-long remains over the living, over the development of the country’s economy?

How can we focus on the economy when the skulls of Mbuya Nehanda & Sekuru Kaguvi are displayed in a British Museum! https://t.co/jRu7me2IPE

I think Mugabe should create another ministry: Ministry of Traditional Beliefs. That will best suit Jonathan Moyo not where he is right now.

Under the administration of President Mugabe, the rate of poverty has been on a steady increase. Reports from the UN World Food Programme states that 72% of the Zimbabwean population live on less than $1.25 a day – below the national poverty line. Mugabe’s land reform policy did nothing for the country’s agricultural, if anything, it contributed to a decline in the economy.

The country’s economy is in dire need of a drastic shift for the better; companies keep shutting down increasing the rate of unemployment, forcing children out of school, and consequently reducing the standard of living for Zimbabweans.  Between 2011 and the end of 2014, the number of companies closed down resulted in job loss for over 60,000 people – likely about a 100,000 now, considering the number of workers that have been laid-off this year. According to  Zimbabwe Congress of Trade Union (ZCTU), the country’s unemployment rate is currently pegged at 90 percent.

Recently street vendors in Harare were given an ultimatum by the government to leave the streets. But where to? Most of the vendors are graduates who have resolved to petty trading due to unemployment. President Mugabe has not only failed in achieving his campaign promise of creating two million jobs, his administration has done the complete opposite – force people out of jobs. An estimated three million Zimbabweans are currently living in South Africa as economic refugees after fleeing the country in recent years. Yet the government places priority on the return of age-long remains. Like Rugare Mudavanhu asked, will the millions of starving Zimbabweans survive on skulls?