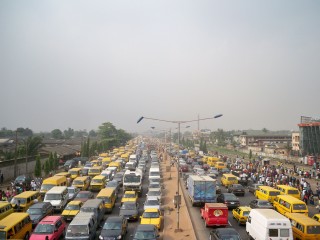 Should potential investment be the sole motivation for promoting a congestion-free Lagos State?

Nigeria’s commercial state, Lagos, is gearing up to become an “investor’s delight” and a “place where every investor get its money’s worth.” The state intends to achieve this by dealing with the traffic congestion malignance as well as the challenges facing mass transportation in the state. The plans were announced by the Lagos State Commissioner for Information and Strategy, Steve Ayorinde, while speaking at the debut edition of the Traffic Radio Series in Lagos.

The series was developed as a result of the concern of stakeholders in the transportation sector, who have come together to trade ideas on how to resolve the traffic congestion in Lagos, which affects the commercial activities the state thrives on. Lagos State Commissioner of Transport, Ekundayo Mobereola, noted that Lagos’ traffic problems are caused by inadequate transport infrastructure, few alternatives to vehicular transportation and a lack of high capacity vehicles, compounded by uneven urban growth and development.

Due to the aforementioned, Lagos loses about N42 billion every year, states, the governor of Lagos State, Akinwunmi Ambode, and this is because daily traffic congestion affects productivity in the state. Productivity is impacted in three ways by the menace of traffic congestion, according to the International Review of Management and Business Research (IRMBR) journal, and one of these ways is “by increasing unit costs through loss of opportunities for scale economies in production and delivery processes.”

Workers and entrepreneurs in Lagos are frequently limited by traffic congestion in conducting their daily businesses and activities, and this affects their planning and income for that day. In addition to this, Lagosians have to put up with the economically dented and polluted environment that is a result of traffic congestion on a regular basis and deal with the outcomes as well. However, most [potential] investors do not.

Therefore, should the dream of enjoying the benefits of investment in Lagos State be the primary motivation in creating a comfortable environment in which people can reside and successfully operate their businesses?

As Mr. Mobereola did well to note, Lagos is overpopulated and deals with poor town planning which has led to traffic congestion and its effects are hazardous to people and the environment. So while investment is definitely a huge plus for any metropolis and normally assumes a fixed position as the ultimate target on government agendas, ensuring that the city and its residents are physically, mentally, and environmentally well off should be a primary objective as well.

But this is not the task of the government alone. Lack of organisation and infrastructure, overcrowding and pollution in a city can cause untold problems for its residents, whether or not they are there to invest. According to Mr. Ayorinde, “we all have significant roles to play.” This involves cooperating with the proper transportation authorities, such as the Lagos State Transport Management Authority (LASTMA) and generally committing to an environment that is better structured to accommodate people.

Therefore, as the Lagos State Ministry of Transport intensifies its collaborations with the Ministry of Physical Planning to reduce the amount of gridlock that the state frequently experiences, Lagosians need to also consider the benefits of a properly organised state by doing their fair share.