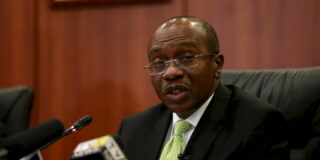 Should Nigerian banks depend on the CBN for forex?

On Thursday, the 10th of February, several media outlets reported that the Central Bank of Nigeria (CBN) would stop the sale of forex to banks by the end of the year. Media outlets quoted Godwin Emefiele verbatim as he responded to questions at the end of the Bankers Committee meeting held that day.

Emefiele said, “The era is coming to an end when, because your customers need $100million in foreign exchange or $200 million, you now want to pack all the dollars and pass it to CBN to give you dollars. It is coming to an end before or by the end of this year. We will tell them: don’t come to the Central Bank for foreign exchange again. Go and generate your export proceeds. When those export proceeds come, we will fund them at 5 per cent for you, and they will earn a rebate. Then you can sell those proceeds to your customers that want $100 million. But to say you will continue to come to the Central Bank to give you dollars, we will stop it. Nigeria cannot continue to depend on FX earnings to fund its import obligations from revenue coming from earnings from products where we cannot determine both price and quantity.’’

However, a report by Nairametrics debunks this famous claim, citing a CBN official who said the governor was only “painting a hypothetical scenario”. The official also said there was no need for the apex bank to issue any clarifying statement, which is a bit absurd at the least. Because of the news, the naira fell against the dollar at the parallel market to N580.

Whether or not the CBN likes to acknowledge it, the parallel market is where most people make their forex trades. The reason is that banks, which buy and sell foreign currencies at regulated rates, can only provide dollars to a handful of Nigerians. Also, there are a lot of bottlenecks in the process of trading forex with banks that make it altogether exhausting for the average Nigerian. But at the black market, prices move organically based on demand and supply. So the black market is the real reflector of market sentiments towards foreign currencies. So the CBN neglecting the need to clarify that statement is a rather tone-deaf disposition to the larger market.

But whether or not Emefiele was being hypothetical in his statement, that scenario he painted was debate-worthy. The question is: what will happen if the CBN stops selling FX to banks?

Firstly, since the banks depend on the CBN for forex, it is easy for the apex bank to maintain a fixed exchange rate. But if the banks source it independently, the fixed exchange rate might no longer work as the market will now determine the rates. To some, that might be scary. But for investors and speculators, it’s good for business.

Furthermore, it makes a case for a floating exchange rate — a policy Nigeria deemed too painful for years. At the Nigerian-British Chamber of Commerce (NBCC) 2022 Economic Outlook held in January, Bismarck Rewane, Managing Director of Financial Derivatives Company Ltd, noted that Nigeria would spend between $8 and $10 billion to defend the naira this year. For context, the CBN defends the naira by pumping money into the markets when the naira becomes overvalued.

Finally, allowing banks to get forex by themselves forces everyone to become active in the export market because that would be their most viable alternative. This approach can increase the country’s non-oil exports and reduce its oil dependency.