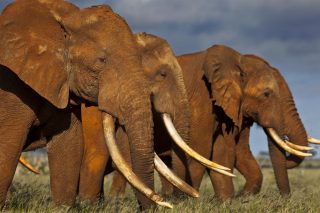 Should elephant hunting be legal in Botswana?

Five years after placing a ban on hunting elephants in Botswana, it is now set to become legal with authorities planning to issue nearly 160 licenses to hunters. While 72 licenses will be given to non-citizens through a nationwide raffle system, 86 will be reserved for locals who pay $800 for the license.

According to Botswana’s minister of environment and natural resources, Kitso Mokaila the hunting season – between September and November – will kick off ‘slowly and cautiously.’ And even though the government’s decision to legalize elephant poaching may be associated with current economic woes, the Southern African country says the elephant population has gotten too high and needs to be curbed.

In 2014, Botswana had placed a ban on this act in response to reports of declining animal populations. But in the long run, it was discovered that Botswana’s elephants were not at risk. In fact, the landlocked country has recorded an increase from 50,000 elephants in 1991 to more than 130,000 in recent times.

So far, the government has indicated that it may not be able to accommodate this number of elephants owing to a number of factors. The country has been faced with drought after months of uneven rain, heat waves and dry spells, which in turn has affected farmers and animals. Reports also indicate that some elephants roam freely across Botswana and often are found in areas far away from their parks.

Moreover, an increasing number of Elephants has become a recurring issue in African countries, especially in the Southern region. Ventures Africa reported Zimbabwe’s sale of some of these wildlife creatures to China and Dubai. South Africa is equally faced with the same menace.

The big question, however, is if hunting is the ideal way to cull this species. Wildlife activists argue against this, as they fear that elephants could become extinct. But a bigger issue lies in the economic implications of having such a high number of elephants in the country.

Dr PJ Stephenson of the WWF African Elephant Program believes that “Elephants are such large and magnificent creatures, but they also need a lot of food and freedom if they are to survive,” – a luxury that most developing countries may not be able to afford.

For instance, in the quest for freedom, many elephants trample on farmlands and growing crops while crushing down trees in the process. Let’s not forget that trees are a major source of oxygen for humans and shelter to other species such as birds.

According to Dr Magome, an ecology specialist at Kruger National Park, “Our obligation is to manage and conserve biodiversity, we have to do something to manage the situation.”

In the past, contraceptive methods have been employed, but not only has it proven to be expensive but veterinarians say that it can only stabilize population, not reduce it. Therefore unless a long-lasting management scheme is reached, hunting might be the only way out.