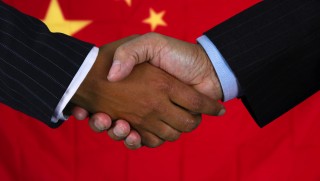 Hong Lei, the spokesperson for Chinese Foreign Ministry disclosed on Monday that China will work with Africa on the construction of three major infrastructure networks; high speed railway, aviation, and road highways. His comment follows the Chinese-built rail project in Addis Ababa, Ethiopia, on Sunday. The Addis Ababa Light Rail Transit (AA-LRT) rail project was inaugurated on Sunday, September 20. The project cost $475 million, and was constructed by the China Railway Group. The AA-LRT is the first light railway on the African continent with two lines that run a total 34 km. According to Hong, the project adopts Chinese standards and technology.

Contemporary Africa-China relations began around the 1950s, when China signed the first official bilateral trade agreement with Algeria, Egypt, Guinea, Somalia, Morocco and Sudan. As of the 21st century, the number of Chinese citizens in Africa is estimated at 1,000,000, while that of Africans in China is around 200,00.

Economic ties between Africa and the People’s Republic of China grows increasingly strong, and China is currently Africa’s largest trading partner. In the 1990s, the trade between both parties increased by 700%. The Forum on China-Africa Cooperation (FOCAC) was established in October 2000 as an official forum to strengthen the relationship. On the other hand, the relationship China enjoys with Africa has been likened to neocolonialism by Western countries, based on what they term controversial business practices and failure to promote good governance and human rights. However, outside of business, China has frequently shown support to Africa in matters of aid, military, health care, and infrastructure. Culturally, Africa hosts three Chinese centres, built to promote the Chinese language and their culture.

Mandarin – the Chinese language – is the most widely spoken language in the world. It is the second most popular business language after English, based on usefulness. China’s economy is the fastest growing and second largest in the world. Its rapid growth, and its emergence as a global powerhouse, shows the significance of the business opportunities and developments in China.

Demand for China’s consumer goods also grows with each decade, particularly given their population of 1.3 billion, and the increase in global activity by China’s major companies. China is also the third largest foreign investor in the world, and has the largest number of trading partners at almost 130 countries.

Business analysts around the world claim that those who do not speak Mandarin are not ready for the 21st century. The study of the Chinese language opens the way to different important fields such as Chinese politics, economy, history or archaeology, and business opportunities.

In Africa, there are 20 Confucius Institute centres in 13 countries. With the growing number of Chinese nationals on the continent doing business, now may  time for more African countries to consider prioritising learning the language, and fostering an even better relationship between China and Africa.

Although Mandarin is a difficult language to master, investing in the learning of it in Africa might prove quite useful, and would give the speakers an edge while doing business. This is especially as China’s economic position in the world is not likely to shift anytime soon, despite the current crisis that it faces, and it will continue to expand its businesses in Africa for a long time to come.

Diplomatic relations between China and Africa have showed a high level of improvement since the 1970s, following the Cold War. China expressed its solidarity with the Pan-Africanist Congress, while also supporting African countries with their quest for independence. In 1971, African nations were instrumental in China’s having a seat in the United Nations. From 1996, China decided to practice a policy of ‘non-interference’ in the domestic affairs of African countries. Between 1997 and the present, about 40 African heads of state have visited China, and in October 2000, the first collective dialogue between the PRC and African nations was held in Beijing.

Favourable diplomatic relations promotes growth and development between the countries involved. Hopefully, the results can be the same for African nations and the People’s Republic of China, in the long run.

In 2014, the trade volume between China and Africa reached US$ 221.88 billion. China’s total direct investment in Africa is nearly US$ 30 billion, while its commercial loans to Africa have exceeded US$ 50 billion. China is responsible for over 1000 cooperation projects all over the African continent, and its assistance to Africa has totaled over 150 billion RMB Yuan in the past several decades.