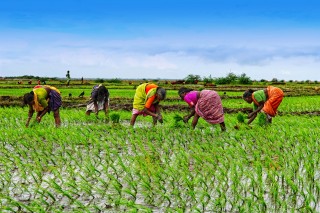 “With an annual increase in world food demand, the use of technology to efficiently integrate Africa’s land resource and labour force into the global food supply is the next frontier in matters of food security.” – John Oroko, Co-Founder, Selina Wamucii.

Kariuki Gaita and John Oroko are changing the game for smallholder farmers in rural Kenya by means of mobile technology. The pair founded Selina Wamucii, a mobile-driven business to business platform that sources for fresh farm produce from smallholder farmers and sell to both local and international vendors and distributors.

Farmers connect to the platform via USSD, and have their information; location, produce type, dates of availability and projected volumes during the growth period documented in its mapping system. “Our system maps out all the farms indicating produce type, the exact location of the farm, availability dates and projected volumes during the growth period,” Oroko tells Horti News Kenya. “The farmer is automatically paid by M-PESA and a traceability code is generated on the spot once the produce is keyed into our system.”

Gaita and Oroko were raised by their mothers who were smallholder farmers. They grew up working on farms and financed their education with farm proceeds. Hence they understand the vast untapped opportunities that exist within smallholder farming and the challenges experienced by these farmers. While studying engineering in school, the pair also had the opportunity of working on a project for smallholder farmers; this increased their love for the business and informed their decision to create the platform and also their choice of name, Selina Wamucii, which are the names of both their mothers.

The pair started the company by pooling together capital from their savings, and in two years the company has broken even, running operations funded entirely by internally-generated cash from sales. To begin the business, a market research and analysis was made. “We crunched and analysed all the fresh produce trade data we could possibly lay our hands on relating to fresh produce currently grown by smallholder farmers in Kenya. From the analysis, we discovered that avocados had an insatiable demand across Europe, Middle East and Asia. That is how we settled on our first produce to market, Avocados,” Oroko says in an interview with How we made it in Africa. Over time, the company has added other produce including pineapple, mangoes, and bananas.

Clearly advantaged by the increasing penetration of mobile phones among smallholder farmers, Selina Wamucii currently has over 3000 farmers on its platform. The company’s growth is also credited to word of mouth referrals by satisfied clients and customers and from increased visibility of their branded produce to people around the world.

Selina Wamucii thrives on efficiency and quality control. According to Oroko, a lot of effort has gone into making operations along the supply chain easier, better organized, and more effective when sourcing from smallholder farmers. And although there exists a few challenges, the company has succeeded in drastically reducing wastage in its supply chain, recording less than 10 percent post-harvest losses, as opposed to 40 to 45 percent losses often recorded for smallholder-sourced produce in Kenya.

The company also educates farmers on the importance of product quality, and trains agents who aggregate produce from farmers, deliver it to the pack house for grading and dispatch to clients locally and internationally. The platform currently operates a 48-hour service delivery, “a client can place an order today and in the next 48 hours, the produce is in Heathrow or Amsterdam,” explains Oroko.

This year, the company is looking to raise funds, acquire cold rooms, increase its order acceptance rate from 30 percent and consequently scale its service across the rest of Kenya, then East and West Africa. “We are betting on the power of the mobile phone to help us shorten and transform the agricultural supply chain and pass the benefits of an efficient chain to both the farmers and fresh-produce buyers,” says.