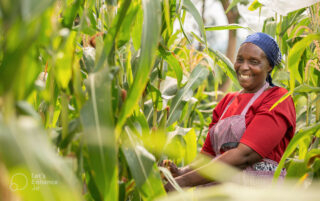 In Zambia, it is still the small-scale farmer that feeds the nation more than any other group. In fact, more than 80 per cent of the food produced in this landlocked Sub-Saharan nation finds its way to the table thanks to small family operations working tiny plots, 70 per cent of which are two hectares or less. The problem, however, is that the financial reward for these humble farmers – the backbone of Zambian agriculture – has been painfully uneven, unpredictable and inadequate. Many Zambian small-scale farmers subsist well under the poverty line. There are approximately 1.5 million “smallholder farming households,” and 20 per cent of those farms are led by women.

Furthermore, the economic divide between rural farmers and urban non-farm workers is wide. According to the International Fund for Agricultural Development, 78 per cent of smallholder farm owners are “extremely poor” or “moderately poor” compared to 28 per cent among city dwellers.

Long hours of faithfully producing a superior product too often leave small-scale farmers at the short end of the financial reward formula. The latter has held sway by way of entrenched distribution and marketing systems that are antiquated and inefficient.

The historic hardship of small farm life in Zambia is why international observers are closely watching a remarkably innovative field-to-table food initiative launched recently in Lusaka. It’s called ZAMBIAFresh. It’s the brainchild of the noted logistics and supply management firm, Savenda Group, founded by Clever Mpoha in 1997. ZAMBIAFresh is undertaken by Savenda Capital, a Savenda Group subsidiary. The centrepiece of ZAMBIAFresh begins with the centuries-old concept of the urban farmer’s market.

We’re all familiar with the urban market concept. Many cities around the world currently feature seasonal and/or permanent public spaces where shoppers can explore stands, stalls, food trucks and trailers to purchase foods, crafts and all manner of goods, depending on the scope of the market.

However, ZAMBIAFresh has taken the ancient institution of the urban trade market and re-imagined it from top to bottom, or more accurately, up and down every element of the supply chain. The ZAMBIAFresh concept has updated every point of action within a system that creates an urban street market deploying advanced logistics enabled and enhanced by an array of mobile, fintech and digital technologies.

The idea is to streamline every “action point” within the complex network of processes that make up a food production and market delivery system. It is significant to note this core principle of the ZAMBIAFresh approach:

That no actors – wherever they are operating within the supply chain – are disadvantaged or short-changed somewhere along the way of getting food from the farm to the consumer table. Solving problems long taken for granted. To gain some perspective, first, consider the five identified steps in agricultural food production:

1. Production/growing of food on the farm.
2. Processing of food products.
3. Transporting food to regional distribution centres.
4. Shipping produce to local retail centres.
5. Food being taken home to the table of consumers.

Experts have identified key elements that have caused hardship for small producers in Africa. Some of these are:

Other negative factors might be considered less controllable “act of god” attributes, such as:

1. The persistent droughts that have plagued Zambia for years.
2. Outbreaks of plant diseases and insect predation on crops.
3. Poor health and exhaustive working conditions, stressing labour availability.
4. Poor soil quality due to natural causes and/or overuse of land due to adherence to traditional/outmoded cultivation methods.

The ZAMBIAFresh team set a goal to zero in on each item above (among many others) and sought ways to solve what is deficient in each one.

With his decades of experience in solving complicated logistics problems across many non-agricultural industries, Savenda Group CEO Clever Mpoha became convinced that bringing modern logistics to the dynamics of traditional food production distribution systems was the key to creating a system that could benefit all players.

Born and raised in a small farming village himself, Mpoha was determined to help Zambian small-scale producers realize fairer compensation for the valuable contribution they make to society. Thus, a primary ZAMBIAFresh goal is to build a comprehensive system that is equitable to all players across the supply chain

Spearheading the ZAMBIAFresh initiative is Sean Moolenschot, CEO and Director of Savenda Capital. He brings an extensive background in agribusiness venture development having worked for top-tier entities, such as ADAS Africa Group and Phatisa, a major African agricultural development fund.

Prior to ZAMBIAFresh, Moolenschot notes that small-scale farmers were required to pay variable fees that are unpredictable due to a rash of diverse middlemen who controlled many of the elements of farm-to-market action points.

Even the “privilege” of selling their own foods in a traditional farmer’s market brought expensive fees, permits and costs to small farm holders. Moolenschot called his team’s focus on the small producer “the true north” of the ZAMBIAFresh plan. He said what is needed is, “A legitimate, sanctioned market with genuine price discovery that will add more money to farmers’ pockets. The ZAMBIAFresh team drew inspiration from similar models developed in South Africa. These adopted an agent-commission model that is described as “small-scale farmer-centric.”

The key is starting with the supply side. That means focusing on the farmer. The South African models could be modified to address the different demographic and social dynamic elements that characterize Zambian horticulture systems.

A test pilot site for ZAMBIAFresh went live on April 9, 2020. It proved a success.

In July of this year, construction will commence on the ZAMBIAFresh Lusaka Market which is expected to serve more than three million customers before the end of 2022. This 11-hectare site will be located in the Lusaka Multi-Facility Economic Zone.

Already up and running is a state-of-the-art market trading facility consisting of an under-roof trading floor comprising 1.5 hectares. This includes cold rooms and specialized ripening rooms.

Not only are local farmers celebrating this new era that will bolster their incomes, but Luska food shoppers are also thrilled that fresh farm-to-table fruits and vegetables will be readily available at attractive prices.

The international community is also paying attention. In fact, the ZAMBIAFresh project garnered the interest of the American International Development Finance Corporation. It agreed to supply Zambia Lusaka Market Ltd. with a $7.5 million loan to support the effort.