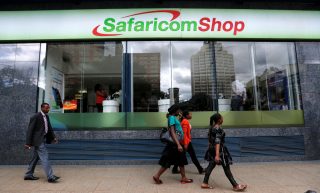 Safaricom in talks to form a consortium ahead of Ethiopia bid

Kenya’s telecoms major, Safaricom is looking to put together a group of investors ahead of its bid for one of two Ethiopian telecoms licenses later this year, the company has said.

The decision to form a consortium for the bid, expected in April, is because of the high entry costs. Reports indicate an expansion into the Horn of African nation will most likely cost more than $1 billion for license fees and network expenses.

According to acting CEO Michael Joseph, the company has opened negotiations with undisclosed investors. “We have not made any decisions (source of funding) yet as the constitution of the consortium has not been finalized. It’s a consortium because it’s a big investment. I cannot provide names,” he said in an interview with Business Daily this week.

The planned issuance of network licenses in Ethiopia is part of a broader economic reform initiated by Prime Minister Abiy Ahmed, who promised to open up the state-controlled economy – particularly banking, telecoms, and aviation sectors – to foreign investment when he assumed office in April 2018.

Besides awarding telecoms permits, Ethiopia also plans to sell a minority stake in its state-run Ethio Telecom to a strategic investor. Experts say acquiring that stake would be a better option for Safaricom than setting up its own subsidiary, which would involve buying land, constructing buildings, recruiting staff and growing its market share against the dominant state monopoly. Ethio Telecom has a subscriber base of 44 million people, making Ethiopia the largest single-country customer base in Africa.

“Buying Ethio is the best investment Safaricom can make,” said George Bodo, a financial analyst and director at Callstreet Investor Relations after Safaricom announced its plan to enter Ethiopia last October. This is because, beyond entry costs, the company can also use the state firm as a platform to launch its mobile money service, M-Pesa.

With M-Pesa, Safaricom transformed Kenya’s economy by allowing people to bypass the rigid banking system to transfer money and make payments using mobile devices. Launching the service in Ethiopia would be a game-changer for the financial system where there are no electronic means of transferring funds from one bank to another.

Safaricom meanwhile has said it is considering all the options. Last year, there was a muted joint bid with South Africa-based Vodacom, which owns a 35 percent stake in the firm. But more telcos could now be involved in the consortium, reports say, as they eye a fast-growing market that has attracted the interest of global telecom operators, including MTN, Orange, Etisalat, Zain and Vodafone, which owns five percent of Safaricom.

The Ethiopian market of more than 105 million people offers a penetration rate of 44 percent while its population, second-largest in Africa after Nigeria, offers immense business opportunities. The country also boasts a good environment for businesses to thrive and has consistently registered robust economic growth, averaging 10 percent in the past five years.