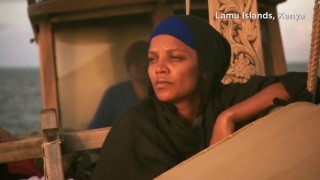 Safari Doctors: How one woman is tackling healthcare issues in rural Kenya

“Being here, being close to home, to be able to fill some of the gaps in accessing health care, it’s kind of been an IV drip for life and purpose.” – Umra Omar, Founder, Safari Doctors.

Umra Omar will stop at nothing to get healthcare across to her people in the coastal region of Lamu, Kenya’s oldest continually inhabited town. Having completed two degrees in the United States, a Bachelor’s in Neuroscience and Psychology, and a Master’s in Social Justice in Intercultural Relations, Omar returned to Kenya in 2010 to give back to her community.

In an interview with Global Citizen, Omar said, “I was so fortunate, to be given the scholarships and the opportunity I’ve had, being a woman, being from Kenya. You know, when you’ve been given the world, you have to give the world back.” For her, giving back meant getting healthcare to the otherwise inaccessible villages, communities, and islands around Lamu, which according to reports, is arduous and expensive; boat trips from Lamu to surrounding islands are said to cost about $300.

As part of her mission, Omar and her team also cater to the communities in the conflict-laden region around Somali-Kenyan border close to Lamu. An area infiltrated by both the Kenyan military and the militant group, Al-Shabab, a region so dangerous that aid groups have fled leaving infrastructures in dire straits.

But none of these factors discouraged Omar, instead, they propelled her to launch Safari Doctors in 2014, a cost-effective program which provides providing free basic medical services to the remote areas around her. Omar and her team employ several means of transportation to get doctors, nurses, and medication to these neighbouring communities; motorbikes, boats, and even airplanes. “Lamu is up on the northern coast, it’s an archipelago and it’s hard to reach. You have to take the bus through Mombasa, which makes it two days of travel to come out here,” she said.

Omar told CNN that there’s been a lot of caution from people who seem worried and concerned about her safety, “Why are you going there? You’re not supposed to.” When asked if she fears for her safety, the 33-year-old answered in the negative, “Scared? No. It’s only dangerous if you feel really threatened. And frankly speaking, we don’t feel like we’re doing something that should warrant us being threatened or a target.”

Every month, Safari Doctors embark on bi-monthly medical outreaches that span days, or weeks depending on available funds, with a core focus on immunizations and maternal care. They also facilitate the treatment of diseases like malaria and cholera. And as for more complex medical issues, Omar’s team persuades their patients to make the trip to Lamu District Hospital.

For this phenomenal woman, she and her team are only just beginning. The long-term goal is to create educational groups, a volunteer exchange, and build clinics where more in-depth care would be provided. To do this, Omar is working on a more sustainable economic model for her initiative, something to ensure its stability and longevity. She plans to open up her trips to donors who help fund the initiative, so they would come on “safaris” to Lamu’s beautiful islands, and also engage with the people.