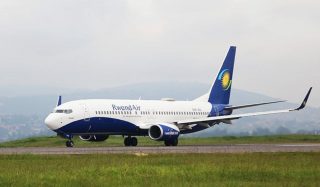 The government of Rwanda has announced the suspension of its national carrier, RwandAir, from trips to South Africa and Zimbabwe, in order to prevent the contraction and spread of a new COVID-19 (coronavirus) variant prevalent in both countries. According to experts, the new variant 501Y.V2 is more of dangerous than the United Kingdom’s variant. This is because it is highly contagious and has the ability to resist antibodies.

“In view of the global concerns on Covid variants prevalent throughout southern Africa, RwandAir announces the suspension of its flights to Johannesburg, Cape Town, Lusaka and Harare, effective 8 February 2021,” RwandaAir said in a statement.

The variant is said to be spreading rapidly in three provinces of South Africa, namely Eastern Cape, Western Cape, and KwaZulu-Natal. As of December 2020, a number of countries had placed a travel ban on flights from SA due to this discovery. They include France, Germany, Saudi Arabia, Switzerland, Turkey and  European nations.

Also, having recorded only a few cases in January, the World Health Organization (WHO) noted an increasing number of countries (U.K, France, Switzerland, Japan, Austria and Zambia) with the variant.

All viruses mutate and have an average of about one to two mutations per month. These tiny genetic changes happen as the virus makes new copies of itself to spread and thrive. The COVID-19 (coronavirus) disease which is caused by SARS-CoV-2 (Severe Acute Respiratory Syndrome Coronavirus 2) is not an exception.

What you should know about the SA 501Y.V2 variant of coronavirus