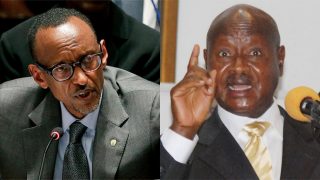 The Presidents of Rwanda and Uganda, Paul Kagame and Yoweri Museveni, have signed an agreement putting an end to months of a brewing trade and diplomatic dispute.

The signing ceremony, which took place in Angola’s capital Luanda, was witnessed by the host country’s President Joao Lourenco, President of the Democratic Republic of Congo (DRC) Felix Tshisekedi and their Congolese counterpart, Sassou Nguesso.

According to a statement issued on Wednesday, the two Presidents agreed to respect each other’s sovereignty and that of other neighbouring countries. And also “refrain from actions conducive to destabilization or subversion in the territory of the other party (and) acts such as the financing, training and infiltration of destabilizing forces,” the East African reported.

Angola’s leader, Lourenco commended both Presidents on their willingness to overcome conflict. Both countries have suffered a strained relationship since the early part of the year.

The dispute started in March when Rwandan Foreign Minister, Richard Sezibera held a press conference outlining some of Rwanda’s concerns with Uganda. The conference was followed by a series of allegations against Uganda. Kigali accused its neighbour of trying to sabotage its economy by providing support for anti-Rwandan groups.

According to Quartz Africa, the minister specifically accused Uganda of supporting the Rwanda National Congress (RNC) and the Democratic Forces for the Liberation of Rwanda (FDLR). Both Organizations are perceived to be against the present ruling party of Rwanda. The official then advised his compatriots residing in the Kampala to return home.

Rwanda went on swiftly to shut its borders to Ugandan trucks, stalling all forms of trade relations between both countries. This was the case until a few weeks later when Kigali reopened its border.

Even though Uganda denied these allegations, both Presidents had been reported to use aggravating words describing each other. “Those who want to destabilize our country do not know our capacity. It is very big. Once we mobilize, you can’t survive,” Museveni said.

On his part, Kagame said, “You can attempt to destabilize our country, you can do us harm, you can shoot me with a gun and kill me. But there is one thing that is impossible; No one can bring me to my knees.”

As the dispute raged on, it looked like peace was far from sight for both states. But with both parties finally arriving at a mutual agreement, it appears they are fully committed to addressing their security, trade and political difficulties.