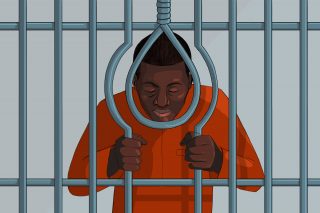 Republic of Chad ends death penalty for acts of terrorism

Perhaps motivated by the intervention of the European Union in 2018, to annul the law of execution of terrorists act, like most African countries, the Republic of Chad has abolished the death penalty for acts of terrorism on April 28th, 2020.

Initially, the amendment was proposed by the Chadian minister of justice, Djimet Arabi, who said that the new amendment of the law is aimed at “harmonizing the constitution in accord with all the countries of the G5 Sahel Group.”

The minister of justice disclosed that the law would be validated once it’s approved by President Idriss Deby Itno, whose party enjoys a huge majority in parliament.

In favor of the exception bill to kill terrorists is Human Rights lawyer Jean Bosco Manga, he believes the decision puts the government on a pedestal as opposed to a revengeful approach.

“The logic of killing a man to punish him for having taken the life of another is absurd.”Jean Bosco Manga.

It will be recalled that, the North Central African country passed a bill in 2016 to abolish capital punishment, but made an exception for perpetrators of terrorism.

The last recorded legal execution in the country was in August 2015, when 10 suspected members of the Boko Haram group based in neighboring Nigeria were shot dead.

On March 23, 2020, there was a terrorist attack by Boko Haram in a military encampment at Boma, Chad, which claimed the lives of at least 92 Chadian soldiers, that were equipped with machine guns and bombs, the incident also left 47 people wounded.

Likewise, between April and September 2017, Boko Haram was reported to have killed 380 people in the Lake Chad area,  according to Wikipedia.

The terrorist group is reputable for consistent attacks in the sub-Saharan region of Africa, with a strategy that mostly involves underage suicide bombers.

Known for their strong aversion for western education, just as the name implies in Arabic, ‘’Boko Haram’’ according to the United Nations, they are accountable for the death of 36,000 people and even displacement of almost two million in northeastern Nigeria, where they once had a stronghold of the region.

Considering the new law that protects terrorist groups against legal execution and their litany of brutal attacks on innocent people, it will be quite impossible to believe that the radicals will not be motivated to carry out more attacks on vulnerable people of the country.

The Chadian government recorded significant progress on the war against terrorism in April 2020 by killing 1,000 Boko Haram fighters through an operation that was launched on March 31st, 2020 in the Lake Chad border region.