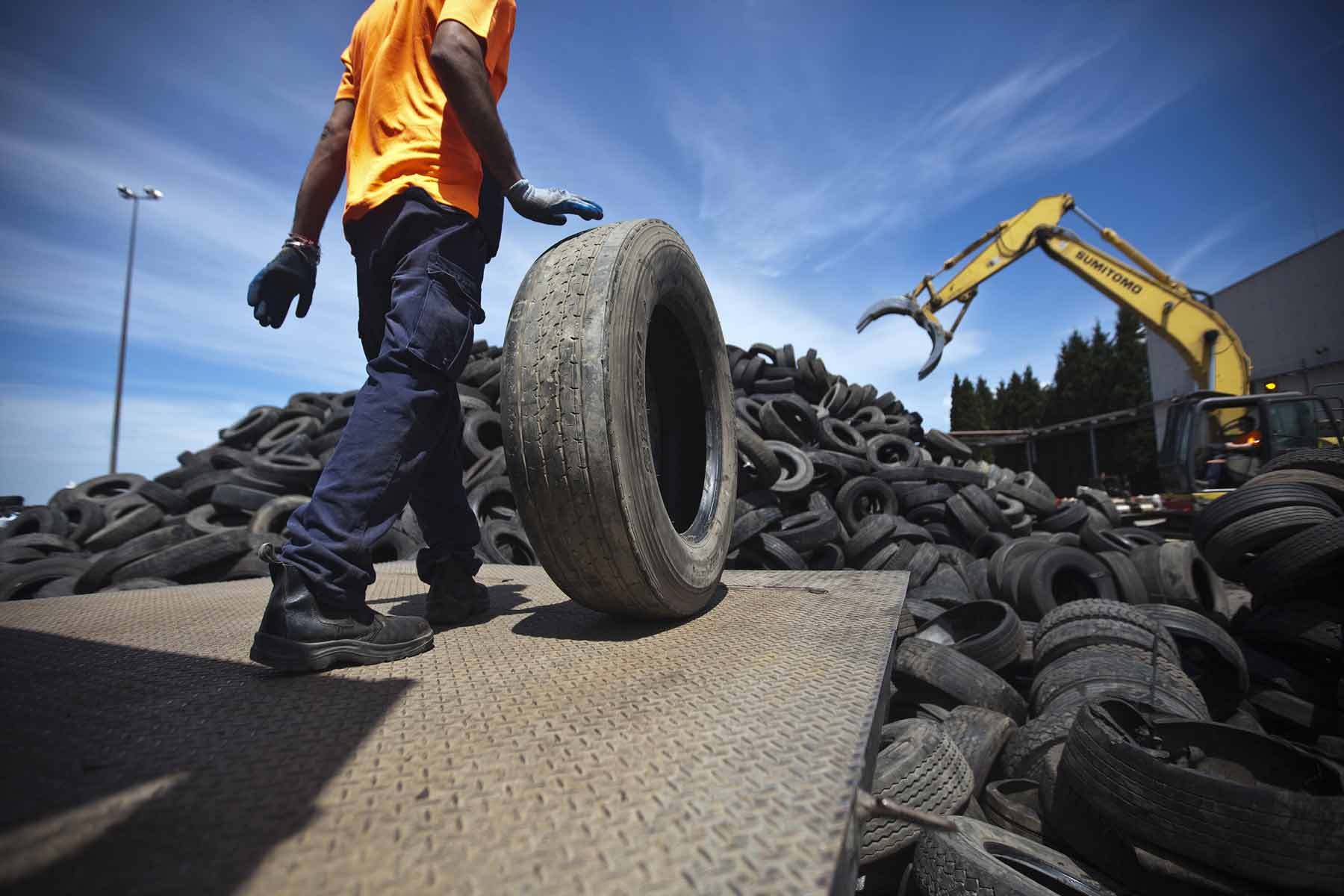 REDISA Gets Traction with Tyre Recycling

Established in July 2013, REDISA CEO, Hermann Erdmann (the Recycling and Economic Development Initiative of South Africa) has one goal and that is to ensure the South African Integrated Industry Waste Tyre Management Plan (IIWTMP) is implemented. The Plan requires tyre manufacturers in South Africa and tyre importers to pay a waste management fee per kilogramme of R2.30 +VAT.

A waste tyre is not only a significant pollutant through burning as a form of heat to a poor household, but also sends various deadly chemicals into the air.

The background to this world first plan stems from the negative impact that waste tyres have within local communities. Annually there are approximately 10 million waste tyres added to the existing 60 plus million tyres piled around illegal dumps or just within and around domestic residents in poor communities throughout South Africa. REDISA’s significance is personified by winning the 2014 Oracle Sustainability Innovation Award. The award recognises the innovative use of Oracle technology to address the global sustainability challenge for its management system.

To date the first waste tyre management fee payments were made at the end of May 2013 and REDISA, a not for profit company (NPC), to fund and implement the waste tyre management in South Africa has collected R575 million. Through our system we have been able to achieve a number of milestones, including re-mediating 28,811 tons of waste tyres,” says REDISA CEO Hermann Erdmann.

For all tens and purposes, the industry is a cut throat playground that requires huge investment to start-up and remain competitive.  To establish a tyre factory these days will set you back up to R1 billion. Add annual upgrades and the figure jumps by approximately R100 million per annum, just to keep up with developments. Trends in the Western world indicate that once a tyre factory closes it will never open up again.

To find out a bit more about REDISA and its role in the market we put some questions to REDISA CEO, Hermann Erdmann. Here is what he had to say;

VA: What makes REDISA special – considering where it all started?

HE: REDISA is responsible for developing and implementing the “Waste into Worth” concept. The REDISA model is unique – literally a world first, and one that is generating a lot of interest beyond its immediate application to tyres. The underlying principle, of putting the cost of eventual collection and disposal of products directly against the products themselves, as a cost of manufacturing, has not been put into practice before in South Africa. There are various waste management programmes internationally that have elements of applying this ‘producer pays’ principle, but none have addressed it in the way that REDISA has.

Dealing with waste streams always realises a cost, and ultimately the source of money to cover that cost should lie in the cost of the product itself. An unmanaged waste stream generates costs in dealing with the consequences of the waste: health, pollution and resource depletion. A properly managed waste stream should not only reduce those costs, but also convert most of what is considered waste back into a resource, either as raw materials or as a source of energy. Given that it is unacceptable simply to ignore the waste problem, it is clearly more efficient and in the big picture cheaper in the long term to deal with the waste comprehensively.

Waste tyres have characteristics that make them relatively easier to handle: they are more-or-less homogeneous, and they don’t have the ‘first mile’ collection problem: end-users typically take their old tyres to a fitment centre to be replaced, so the first step of collection is taken care of.

The concept was applied in South Africa to the tyre industry specifically to eliminate the problem of waste tyres and turn them into something of value. This – resulted in the REDISA Integrated Industry Waste Tyre Management Plan, as gazetted by the Minister of Environmental Affairs, Honourable Edna Molelwa.

VA: Your recent achievement at the 2014 Oracle Sustainability Innovation Award is special. What can be expected from REDISA in the near future?

HE: REDISA has several targets that we plan to achieve this year, including incorporating Waste Pickers into the waste tyre management process and creating 10 000 new jobs, across different stakeholder groups, over the next four years. This year we plan to open 30 depots across the country and create 1534 jobs. As at the end of August we have already reached 93 percent of our 2014 job creation target, and processed 36 152 tonnes of waste tyres.

VA: Your focus is on the tyre industry, where else do you see REDISA playing a critical role?

HE: Going forward we see REDISA playing a critical role, through waste management, in terms of developing job opportunities as well as greater support of SMME’s and entrepreneurs in the

VA: REDISA is working in a unique part of the waste industry – playing your part. But this is but a small portion of the industry – how can we increase the efforts to deal with waste in sustainable way?

HE: The way to get worth from waste is to turn it into something that people will pay money for, and the way to do that is to create a circular economy. Instead of making a product for consumers to throw away, we need to extend the life of the product beyond the consumer stage by recovering,

recycling and reintroducing it into the economy.

The public is also urged to report any stockpiles to REDISA. REDISA is responsible for developing a

HE: Oracle management systems have been an effective tool for REDISA in order to build and grow a new recycling industry, create jobs, deal with an environmental problem and at the same time contribute towards reducing the national carbon footprint. One of the important elements of REDISA systems is comprehensive and geo-located data collection. In order to understand the extent of the waste tyre problem in the country, REDISA deployed a mapping system which has helped to identify the sources of waste tyres such as tyre dealers, and waste tyre stockpiles.

To date, 1 683 waste tyre collection points and 96 stockpiles have been identified and mapped thanks to the IT system. REDISA is using mobile technology, running the same systems, deployed to REDISA depots and even to dump sites for data collection and payment processing. All of this data resides in a single environment, making access to information for reporting and decision making very powerful.

VA: What level of investment is needed to eradicate harmful tyre waste?

HE: Instead of making a product for consumers to throw away, we need to extend the life of the product beyond the consumer stage by recovering, recycling and reintroducing it into the economy. Completing this cycle is what is known as ‘extended producer responsibility’.

The difference is that in Germany, extended producer responsibility is voluntary; in South Africa, it is mandatory. By law, every tyre manufacturer and importer must pay R2.30 per kilogram to REDISA, an industry-independent body that shoulders their recovery and recycling liability for them.

VA: Can you highlight any irreversible damage to the environment and the efforts needed to sustain the status quo?

Tyres are being burnt since they are deemed to have no value other than their steel content which is sold as a means of earning income. There is a high health risk linked to burning tyres, burning tyres release carcinogens into the air and residual unburnt oily pollutants leach into the ground.

Old tyres are an environmental disaster, whether it is clogging up landfills, lying in illegal dumps, harbouring mosquitoes and vermin, or being burned to extract steel.

By providing funding for the collection of these tyres, which offers a greater earning potential than the scrap steel value, persons seeking to earn additional income will be incentivized rather to make application to be registered as a collector, be allocated a monthly quota and deliver their quota of waste tyres to our depots.

VA: Is Africa on the REDISA radar and to what extent?

HE: While there isn’t an established plan to expand into Africa yet, the REDISA plan, being a world first, with its core focus on developing job creation and economic opportunities while eradicating the environment of harmful waste, has received considerable amount of international attention.

Over and above winning the Oracle Sustainability, the initiative has also been featured in the European publication Tyre and Rubber Recycling Magazine. REDISA also continues to partake in international events, for example a REDISA delegate hosted a discussion panel on the adventures of waste and recycling at the Global Economic Symposium (GES) in September.

It is expected that the impact of REDISA’s efforts will set the pattern for waste management across the continent of Africa in the coming years. Proudly, the continent and South Africa have reason to be proud of not only a first global plan in this sector but also that we are leading the way in its implementation and action.