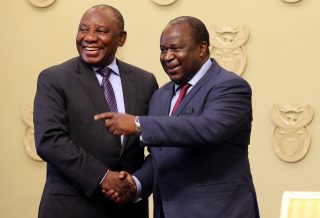 South Africa’s President, Cyril Ramaphosa has named the country’s former head of South African Reserve Bank, Tito Mboweni as the country’s new finance minister. Mboweni will be replacing Nhlanhla Nene who has been under tension and public scrutiny over reports of his meeting with the Gupta family.

Mr Tito Mboweni is expected to uplift the country from recession and “restore confidence in the reputation of the country’s economic management.” During his time at the Reserve Bank, Mboweni made a landmark achievement by building the country’s foreign-exchange reserves to almost $40 billion from less than $10 billion, an achievement many are expecting him to replicate in his new position.

“In the wake of Mr Nhlanhla Nene’s resignation, I have decided to appoint Mr Tito Mboweni as minister of finance with immediate effect,” President Cyril Ramaphosa told journalists while announcing the appointment.

The former minister, Nhlanhla Nene who became the finance minister for a second time after being sacked from the position by former President Zuma was pressured to step down after admitting that he met with the Guptas. It is important to note that he had earlier denied this allegation.

Since the rumour of his resignation got out, it has had a damaging effect on the rand, with the country’s currency falling to R15/$.

The new finance minister is now assuming the role at a critical time when the country’s economy is crumbling. “Mr Mboweni takes on this responsibility at a very critical time for our economy,” Ramaphosa further stated.

Last Month, the president announced some stringent measures in addressing the current economic downturn in the country. The baton has now been passed Tito Mboweni, who is also a special advisor with the international investment bank, Gold Sachs to grow the economy and lure investors back into the country.

The new appointment has already reaped ‘good fruit’ for the country and its dwindling currency. According to Reuters, Mboweni’s appointment has “soothed markets after days of uncertainty.”  Thus, South Africa’s Rand which had weakened to R15/$ on Tuesday afternoon surged to a session best of R14.6525 after the appointment of Mr Nene. It is also important to note the increase of bank stocks in by 1.19 percent.

Mboweni’s appointment seems to have been warmly accepted in the business community, while policy experts have also expressed deep optimism in the leadership of the former labour minister.

“Without any doubt, this is an impressive appointment. We were nervous and anxious about Nene’s departure and what might have happened if he did not go. Mboweni is proven as a reserve bank governor and in labour, aligning labour with business, as someone who piloted the Labour Relations Act,” said Alan Mukoki, CEO of the South African Chamber of Commerce.

Despite being South Africa’s fifth minister for finance in three years, what many citizens now hope for is a complete turnaround through effective fiscal policy. Mboweni whose name was once the title of a hit track by South African music act, Casper Nyovest has now been handed a tasking job to save his country from its technical recession by upholding the anti-corruption tenets of Ramaphosa’s government.