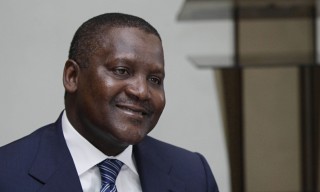 A report filed at the Nigerian Stock Exchange today, indicates a high turnover and profit margin for Dangote Cement Plc for its third quarter. The pan African cement giant rose to N365.45 billion, a 17.8 per cent increase from last year’s N310.21 billion. Pretax profit for the period also increased to N166.91 billion compared to N154.05 billion a year ago.

Nothing but the radical African expansion projects by the group can account for such a result this year. Dangote cement has built and commissioned cement plants in Ghana, Ethiopia, Cameroon, Nigeria, Zambia, and recently Tanzania, with that of South Africa and Senegal set to be commissioned at the end of the year.

The unaudited results of the past nine months, showed that the group’s earnings per share rose by 18.6 percent to N9.80 from N8.26 naira. This year, the cement group recorded an operating profit of N173.5 billion, a 6.8 percent increase from N162.5 billion generated last year.

“I am pleased to report that sales from outside Nigeria have contributed nearly 29 per cent of volumes so far this year and 39 per cent in the third quarter,” said Onne Van der Weijde, the CEO of Dangote Cement PLC. Operations in Nigerian accounted for N162.7 billion, South & East Africa – N7.4 billion, and West & Central Africa – N2.9 billion. Weijde further said the report demonstrates the group’s success in diversification, and swift market share earnings in new countries.

This report is a clear indication that the Dangote group is succeeding in their objective to make African nations less import-dependent. The company is set to further launch cement plants across Africa to reach production capacity of 62 million tonnes a year in the next three years.