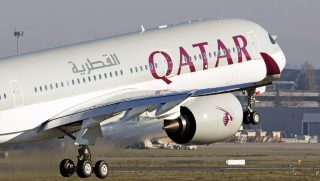 Qatar Airways has expanded an existing partnership with Kenya’s national carrier, with a view to allowing passengers of the Gulf-based airline make smooth transits to the coast and western Kenya.

The Doha-based carrier resumed 14 weekly flights to Nairobi early August after Covid-19 lockdown restrictions were eased. An expanded interline agreement with Kenya Airways now provides it with domestic connections to Mombasa and Kisumu.

“Since 2016, both airlines have witnessed the significant benefits interline cooperation has brought, providing passengers with unrivaled service and seamless connections,” Qatar Airways Vice President for Africa, Hendrik Du Preez was quoted as saying. “The expansion of the interline agreement between Qatar Airways and Kenya Airways is a natural next step in the strengthening of our partnership.”

Those two new destinations are in addition to 41 international connections across Africa, including Abidjan, Antananarivo, Bamako, and Monrovia, thereby extending Qatar Airways’ footprint on the continent. The airline plans to rebuild its network to more than 125 destinations including 20 in Africa.

That goal has seen it launch an aggressive push into the continent in recent times. In November 2012, the Qatari carrier launched a thrice-weekly route to Maputo, Mozambique, positioning itself to serve unconnected locations. That launch was its tenth new route in that year, as the company pushed on in a wave of African expansion.

An expansion into the Horn of Africa region and southern part of the continent followed two years later with launches in Djibouti, Ethiopia, Zimbabwe as well as a major expansion drive in South Africa.

Qatar Airways in February this year confirmed the acquisition of a 49 percent stake in the loss-making RwandAir, two months after taking up a 60 percent interest in Kigali’s new Bugesera airport, a project worth nearly $1.3 billion and initially scheduled for completion in 2020.

The Gulf airline invested in the Rwandan carrier after identifying Africa as a market with significant potential, Qatar Airways Chief Executive Akbar al-Baker said in a briefing at the CAPA Qatar Aviation conference while confirming the acquisition of RwandAir. “We see Africa as another region that has huge growth potential.”