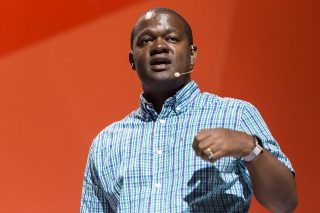 Professor Noble Banadda of Makerere University, Kampala, Uganda has become the first African to be awarded the Pius XI medal. This is in recognition of his outstanding researches in science and engineering. The medal, which is awarded by the Pontifical Academy of Sciences every two years to a scientist under the age of 45, was established by Pope John XXIII to promote scientific research.

Prof. Banadda was raised in Kabale, South-Western Uganda where he had his primary and secondary school education. He picked an interest in science while observing medical doctors in their white laboratory coats and started on his journey but eventually ended up in an entirely different field.

He obtained a Bachelor of Science in Food Science and Technology from Sokoine University of Agriculture, Tanzania, earned his Master’s in Processing Engineering and a Doctorate in Chemical Engineering from the Katholieke Universiteit Leuven, Belgium. There, he became the first black African to get a Doctorate degree from the University and by the end of his Doctorate, he had nine journal papers in peer-reviewed scientific papers.

In 2007, Prof. Banadda won the Cochran Fellowship to do Postdoctoral studies in the Department of Chemical Engineering at Massachusetts Institute of Technology (MIT), USA. He was promoted to the rank of Professor when he was 37 years old in the Department of Agricultural and Biosystems Engineering in Makerere University, where he is currently the Head of Department. He is the youngest Fellow at the Uganda National Academy of Sciences and a Fellow of the Global Young Academy.

In September 2014, he was honoured as Young Scientist at the Annual Meeting of New Champions, World Economic Forum in Tianjin, China. In 2015, Prof. Banadda was one of seven Africans (in Africa and Diaspora) that qualified as Fellows of the prestigious Next Einstein Fellowship (NEF) Award. The NEF Scientific Program Committee said they were particularly impressed by his scientific achievements and potential for leadership.

He was ranked number 35 in the world and number two in Africa in his field and has served as a visiting professor in universities in Africa, Europe and the USA. His area of research is bioprocessing engineering, specifically mathematical modelling of biological systems and interactions. He has researched and co-published works in the domain of Biosystems engineering and has supervised quite a number of PhD and M.Sc. thesis. According to Google Scholar, his works have been cited over 300 times.

Prof. Banadda led a team that pioneered the first ever farmer-based low-cost multiple purpose vehicle in Uganda. He also led a team of students and experts from the University of Kentucky to develop a machine that produces diesel fuel from plastic. The technology relies on a process called pyrolysis, the thermal decomposition of organic material at very high temperatures in the absence of oxygen and the diesel produced is used to run tractor engines and other machines.

He attributes his success to self-discipline, hard work, luck and building networks. He advises the academia, students and whoever aspires to be successful to keep those attributes in mind. He also lays emphasis on knowing the right people, managing oneself and making good use of time given. His success is truly a great achievement for him and the world and should inspire all the young scientists out there.

Prof. Banadda is due to give a presentation on his research at the next plenary session of the Pontifical Academy of sciences, which takes place November 12th-14th at the Vatican.