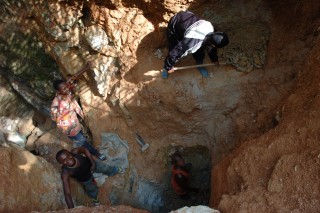 In the minds of the masses, the perils of the mining and minerals sector are often confined to explosions, site collapses, toxic leaks and other dramatic forms of mishaps and accidents. However, the mining community and global watchdogs have long known that the spread of infectious diseases amongst miners is having a far more widespread and damaging impact on communities.

In Africa, the rise of mining-related diseases continues to disproportionately affect rural communities. A 2017 peer-reviewed white paper from BMC Public Health lays bare the public health implications of the African mining industry. Drawing upon over four decades of data, the paper shows that Silicosis and Tuberculosis (TB) are on the rise amongst Africa’s miners.

Where there is mining there is disease…

Mines in Africa largely operate in very remote locations. During the development of these mines, activities involving the removal of vegetation and the building of corridors will almost certainly affect environmental biodiversity and change wildlife population dynamics, bringing wildlife in closer contact with people as they begin feeding on new food sources created at construction camps, canteens, and settlements. The perpetual risk therefore of the emergence of zoonotic diseases such as Ebola, Lassa Fever, Marburg, Yellow Fever and other rabies viruses continues to be a threat not just to miners but to the whole communities within the region, and globally.

The circular movement of mineworkers across provincial and national borders, which is typical of the mining sector and those along the value chain, further exacerbates the problem. Many illnesses can be prevented through the provision of clean water, sanitation and basic healthcare services in mines and the wider population. Yet, Cholera continues to kill in Cameroon, Chad, Niger and Benin. African Sleeping Sickness occurs in several countries in Central and East Africa and TB continues to be particularly acute in South Africa, alongside four of its labour-sending neighbours. Lesotho, Mozambique, Swaziland and Zimbabwe are particularly hard hit.

The sustainability of Africa’s mining sector is a shared responsibility…

On the upside, this type of concerted effort is increasingly underway, putting Africa’s mining sector at the heart of regional and international control efforts. Last year, The Global Fund and a Regional Coordinating Mechanism (RCM) representing a group of 10 Southern African countries signed a landmark grant of USD $30 million towards transformative interventions to reduce the high rates of (TB) in the mining sector in Botswana, Lesotho, Malawi, Mozambique, Namibia, South Africa, Swaziland, Tanzania, Zambia and Zimbabwe.

Many of the large international mining companies are taking proactive measures in improving the health of their workforce. The top three commodity sectors (platinum group metals, gold and coal) employ millions across the continent, often in extremely remote areas. This does make it logistically difficult for companies to facilitate off-site trips to far-away health centers. Many of the larger mines in Africa now provide on-site diagnostic healthcare services, particularly in screening for TB.

Additionally, many mining companies are extending their responsibility towards safeguarding the health of surrounding communities by actively funding the provision of general health services through local clinics, providing healthcare coverage for families. Other service providers along the mining value chain must also assume responsibility. Companies such as RA International, which provides construction, logistics, life support and maintenance services in some of the world’s toughest mining and post-conflict environments; ensures that all of its field projects across Africa have the necessary health care facilities available for its workforce on and off the field.

RA International has well-equipped health clinics across its operations in Africa, managed by trained medical staff, with these facilities being available to employees for any health-related issues. In Chad, RA International conducted a rat and mosquito control program as part of an on-site sanitation project which was a critical element for the health of workers in the area. In Somalia, we conducted a large-scale dog and cat trap/neuter/release/euthanize program to eradicate disease and stabilize the populations.

The harsh realities of illegal mining…

While there is an upward trajectory in the fight against disease spread in the mainstream mining sector, thousands of miners working in poorer conditions in smaller or illegal mines continue to remain at risk. Illegal mines in South Africa are spread over at least 6,000 disused gold, diamond, chrome and platinum mines, which means hundreds of thousands of poor, immigrant miners risk their lives and the health of their families and communities. This must change. Both the private sector and governments have a role to play.

Whilst the private sector has a clear moral responsibility to end illegal mining, the scale of the problem requires regulatory support. Not only are workers (and consequently their families) at risk of disease, but they are very often paid a pittance. The onus is both on the private sector and regional governments to ensure that they join hands to create a sustainable policy framework to improve the overall health condition of the miners.

Progress is being made at the local government level. In Ghana, Africa’s second largest producer of gold, the newly elected government issued a temporary ban on all small-scale mining. The government’s Lands and Natural Resources Ministry has also instituted a five-year Multilateral Mining Integrated Project aimed at wiping out the problem altogether. Whilst mining activities and associated environmental and social changes will continue to create conditions that favor disease emergence, public and private sector players in the mining industry should be accountable. All of us in the value-chain have to do more, not only because it is morally right – but because thousands of our fellow men, women and children in the most impoverished parts of our world are suffering needlessly.