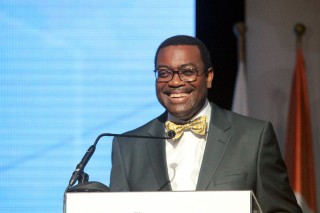 This is what the President of African Development Bank said at the U.S-Africa Business Summit 2017

I wish to thank my dear friends Florizelle Liser, President and CEO of the Corporate Council on Africa, and Chairman Jeffrey Sturchio for inviting me to speak at this U.S – Africa Business Summit. It’s great to see so many people here.

A close partnership between the U.S.A., the most powerful nation in the world and Africa, the next investment growth frontier in the world, is so crucial. Let us be great, together! And I truly believe this can happen.

I was honoured to have had a brief chat on this with President Trump during the G7 Summit in Taormina, Italy, just last month. And I agree with President Trump that Africa is a place of opportunities. I brim with optimism for Africa, and I take my title of Africa’s Optimist in Chief, very seriously.

We must change the lenses with which we look at Africa, from the traditional development mindset to an investment mindset. And I agree completely with Secretary Wilbur Ross about the importance of the shift from aid to trade, to which I would add the extra insight that it should be from aid to investment. Africa is the place to be, so let me make the case.

African economies are doing well despite recent tough global economic environment. The GDP growth rate, which averaged 2.2 percent in 2016, is estimated to rise to 3.4 percent this year and to 4.3 percent in 2018 – all above the global averages. But the averages don’t tell the real story. In 2016, 12 African countries grew at above 5 percent and 20 countries grew at between 3-5 percent.

Most of the best performing countries are the non-oil or non-commodity dependent economies. Cote d’Ivoire grew at 8.2 percent, Ethiopia at 8 percent, Tanzania at 7.2 percent, Senegal at 6.7 percent, and Rwanda and Kenya at 6 percent, respectively. So we are swimming with our heads above water. Africa is buoyant and robust. The African economies are doing better than the global average. The message is clear: African economies are resilient.

They are resilient because of macroeconomic stability, good governance, rising domestic demand, and increased regional trade.

African economies are also reforming very fast. Africa accounted for 30% of all global improvements in business and regulatory reforms in 2016. The World Bank’s Doing Business 2017 report shows that 34 out of 48 countries in sub-Saharan Africa had at least one business regulatory reform in the previous year.

And you can feel the winds of change from governments around the world. I was in Berlin just two days ago with Chancellor Merkel and 9 African Presidents, as she launched the G20 Compact with Africa, which will focus on expanding private investments in Africa. G7 governments’ focus at Taormina last month was also on Africa. Japan launched a $30 billion initiative for Africa.

We need to reboot and boost U.S. – Africa commerce and investments. And the time is now! I was very happy that Secretary Ross also mentioned that it was time to engage with Africa.

In short, Africa offers you all “The Deal of the Century”, and America should in no way not be left behind.

We must all look at Africa differently. As Josh Becker, US co-founder and CEO of Impele, said of US companies’ approach to Africa, “companies take their notebooks but not their checkbooks”. Let me say to you today that Africa needs your checkbooks!

To accelerate business investments in Africa, the African Development Bank will launch later this year the Africa Investment Forum –a totally transactional Forum to unlock global and regional institutional investors to Africa. And Africa funds must invest in Africa – this is a crucial point. We look forward to working with the U.S. Government, the Corporate Council on Africa, and all of you on this.

Together, let us accelerate Africa’s development, for as John Legend said, “the future was yesterday and we are already late”.

Together, let us do more for Africa! And let us be great together!”