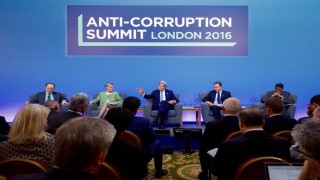 I feel honoured and privileged to be invited to this Summit dedicated solely to combating corruption, a canker worm in the social and economic fabrics of all countries. May I first commend Prime Minister Cameron for considering it worthy and timely to convene this Summit. I recall how he championed anti-corruption actions at home and in several international fora as well as his initiative to place tax, trade and transparency on the forefront of the G8 agenda a few years ago. As the Co-chair of the United Nations High Level Panel on the Post-2015 Development Agenda, he took the lead to galvanise agreement to place the anti-corruption fight at the heart of the global approach to combating poverty. Today, this accomplishment is embodied in Goal 16 of the Sustainable Development Goals (SDGs).

Corruption is one of the greatest enemies of our time. It runs completely counter to our values, as it rewards those who do not play by the rules and also creates a system of patronage where the resources are shared out by a small elite, while the majority are trapped in poverty. When it comes to tackling corruption, the international community has unfortunately looked the other way for too long. We need to step up and tackle this evil. This charge sums up why we are gathered here today.

THE ANTI-CORRUPTION STANCE OF THE PRESENT ADMINISTRATION

Tackling corruption has been a defining feature of my public service. Upon assuming office on May 29th last year, I made fighting corruption as one of the three pillars of our Administration’s priority programmes. Indeed, when I came to office, corruption had become endemic and systemic, threatening the very foundation of our national life, security and democracy. As a result, I have demonstrated zero tolerance for corrupt practices by combating corruption head-on. We are determined to bring integrity to governance through leadership by example.

At the global level, Nigeria is committed to forging strategic partnership with willing countries to combat corruption. For too long, Nigeria has been a victim of both internal and international criminal cartels indulging in corrupt practices. This phenomenon is manifested in the plundering and stealing of public funds, which are then stashed away in secret offshore accounts. As a result, Nigeria is calling on this Summit to create an anti-corruption infrastructure and a strategic action plan that will include the monitoring, tracing and facilitating the recovery of stolen funds and assets hidden in secret accounts abroad.

The anti-corruption measures that we would adopt in this Summit should also include mechanisms that will assist countries like our own in combating illegal activities in the oil sector, involving oil theft that has become a serious threat to the national economy and security. It has been estimated that oil bunkering, which is akin to trade in “blood diamonds”, now costs Nigeria about 7 billion U.S. dollars annually. This Summit must, therefore, come up with measures to combat oil theft, which constitutes a credible threat to global energy security. Multinational oil companies and banks, international financial institutions as well as international shipping lines and insurance firms must cooperate fully with oil producing countries, such as Nigeria, in cleaning up our oil sector and freeing it from the clutches of international fraudsters.

UNDERSCORING THE RELEVANCE OF THE SUMMIT

This Summit, the first of its kind focusing on anti-corruption, should be leveraged upon by world leaders to send a strong signal to the whole world that corporations and individuals can no longer get away with tax fraud, money laundering, transfer pricing and illicit funds transfer to offshore locations or tax havens. The outcome of this Summit should drive a global process to reduce, if not eliminate, corporate and individual corrupt practices. From today, we should hold these perpetrators to account and freeze their ill-gotten assets.

Furthermore, this Summit should adopt a global anti-corruption agenda that will include transparency, accountability, social justice, as well as fair and legitimate business practices and environment.

Corruption undermines the ability of countries to finance development. I recall in this regard the landmark Addis Ababa Action Agenda of the Third International Conference on Financing for Development held in January this year. A prominent feature of this global framework is the recognition that good governance and measures to combat corruption and curb illicit financial flows will be integral to the efforts to attain sustainable development Post-2015.

It is for these reasons that the Nigerian government expressed its determination to address illicit financial flows as they serve as major impediments to progress. I wish to reiterate our call in Addis Ababa that the global community must come up with mechanisms for dismantling safe havens, and facilitate the easy return of stolen funds and assets to their countries of origin, as mandated in the United Nations Conventions Against Corruption and Transnational Organized Crimes. Let us seize this opportunity to act now.

We must henceforth see the anti-corruption fight, not as an end in itself, but as an instrument in the fight to eliminate poverty and restore the right order of things.

I recall our proactive roles at the United Nations in the adoption of the 17 Sustainable Development Goals (SDGs) in September of last year. Goal 16 of the SDGs envisages a world with access to justice and open, accountable institutions as well as recognizes that governance has a development dividend. This provides us a platform to set new milestones for confronting international financial criminality and impunity.

May I plead that we seize the momentum generated by this Summit to design a rules-based architecture to combat corruption in all its forms. The hallmark of this new order must include greater transparency and accountability of all institutions, corporate bodies and individuals. It must also embody stricter enforcement regulations of governing international financial flows and tax havens.

There is no question that corruption accounts for 10% of the cost of doing business globally. Equally true is that reducing corruption by the same proportion might add 380 billion U.S. dollars yearly to the world economy. These findings are illuminating. But our concerns in Africa go even beyond that

African countries have been accused of endemic corruption, although it is a universal evil. However, African countries have all too often been the victims of international corruption planned and executed from abroad using our own resources. The Report of the High Level Panel on Illicit Financial Flows from Africa, headed by Mr. Thabo Mbeki, former President of South Africa, revealed that Africa loses 50 billion U.S. dollars annually and has lost in excess of 1 trillion U.S. dollars in illicit financial flows over the last 50 years. This amount equals to the total sum of the Official Development Assistance (ODA) received by all African countries during the same period! This finding is as troubling as it is revealing.

We can begin to appreciate the stark reality that every dollar siphoned through dirty deals and corruption to offshore tax havens makes the livelihood and survival of the average African more precarious. We of the African continent, therefore, avail ourselves of this opportunity to call for an end to the plundering of our continent through organised international crime.

To conclude, the new anti-corruption architecture that we seek to build must be ambitious, effective and deliverable. To this end, the commitments Nigeria hopes leaders here present to sign up to should include the following:

a) Tracing, freezing and returning stolen funds to their countries of origin without delay or preconditions. There have been substantial progress, but more remains to be done in this regard;

d) Introduction of stringent rules and regulations on the registration of beneficial or shell companies and disclosure of their transactions; and

e) A concerted international effort to address the general and pervasive problem of money laundering, which distorts the international financial markets, undermines good governance and serves as a conduit for financing the activities of criminal gangs, including terrorists.

May I finally again commend the British Prime Minister for convening this important Summit and I am hopeful that at its end, it will kick- start real action to combat corruption.