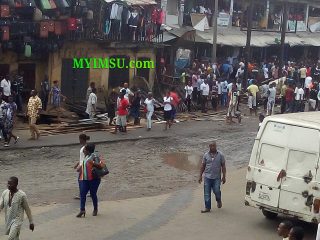 #PrayforOwerri: Why the recent wave of demolition activities needs to stop

Many Nigerians have been devastated by the wave of demolition activities carried out by several state governments in recent years. The basic idea behind the demolitions is urban development, and to do this, the state governments tear down buildings and expand or reconstruct existing small lane roads.

However, things took a different turn for the people of Owerri in Imo state as the“illegal” demolition of the Owerri main market by the state government led to the death of some civilians, leaving others injured.

The proposed demolition of the main market commenced on Saturday 26th August as a horde of armed security operatives stormed the market place destroying goods and properties. Traders and market sellers woke up to witness the destruction of their goods without adequate prior notice from the government. And like what is obtainable in most parts of the country, a protest broke out and it all went downhill from there. Military men from the 34 Artillery Brigade, Obinze, who were deployed to maintain law and order during the forceful demolition of the market, shot indiscriminately into the air to prevent further resistance to the demolitions. The rift resulted in the death of three unarmed civilians including 10-year old Somtochukwu Ibeanusi, who was reportedly trying to assist his parents to evacuate wares trapped inside their shop.

In a recent press release, the United Labour Congress (ULC) condemned the act by the government and described the killing of innocent citizens by agents of the state as “barbaric, unconscionable and out of sync with the dictates of modern societies that thrive on strict adherence to the Rule of Law and natural justice.”

The president of the congress, Comrade Joe Ajaero, stated that the move was a “national eyesore which has left a deep gash on our collective conscience as a people and as a country.”

Since May 2015, a constant string of demolitions has erupted through the state as part of a long term“urban renewal” plan. The most recent being the July demolition of the Shell Camp Quarters, inhabited by serving and retired lecturers of Alvan Ikoku Federal College of  Education, despite a subsisting court order. The state’s High Court had issued a restraint on the government to halt all forms of demolition but the government has consistently flaunted these orders.

These demolitions have affected businesses, residential buildings, schools, churches and other private enterprises. It will also be noted that most affected persons, groups and communities were not served appropriate notices or even consulted by the state government’s physical and urban planning authorities prior to the demolitions. Despite the glaring evidence posted on various social media platforms by disturbed citizens, the state government has vehemently denied allegations of the recurrent demolitions which have led to the loss of lives and property.

While the intent of various governments may be noble, it should not be obscure that this quest for “development” continues to endanger the lives and property of innocent civilians.