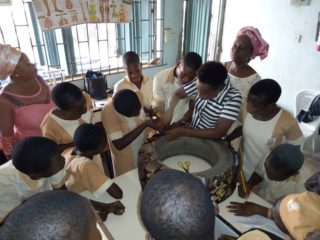 Despite the scorching heat that afternoon, Sanya sat in a restaurant opposite his house to catch the second half of the Champions League finals. Every second, the room became even hotter as the heat overpowered the capacity of all four air conditioners. At that moment, he asked himself a very crucial question, was this unbearable weather in any way related to recent warnings about climate change? It wasn’t until one of the staff changed the station for a news update, that everyone present was taken aback by reports of the restaurant’s greenhouse gas emission. Clearly , it had been constituting a hazard and something had to be done.

Earth’s temperature is currently at 0.99 °C, and nineteen of the 20 warmest years we have witnessed occurred around 2001. It doesn’t help that according to a NASA Climate Change report, some of the devastating effects of climate change on our environment are heat waves, heavy downpour, erosion, rising sea-levels, drought, increased temperature, wildfires and many more.

However, while there are many who remain in the ‘dark’ or appear unbothered about the state of things, there are others taking conscious measures to make the earth a better place. Olamide Ayeni-Babajide, the founder of Pearl Recycling, is one of such individuals.

Ideally, the idea of wall decor made from corn husk is largely considered unusual. This is because it is treated as waste in some parts of the world. But having discovered that using it as an alternative was better for the environment, Olamide became inspired to devise even more ways of securing a climate friendly future.

“Once I figures this out, it propelled the creative side of me to start thinking of how waste can be reused creatively in order to reduce the amount of waste that ends on dumpsites and also create an alternative source of income,” she told Ventures Africa. 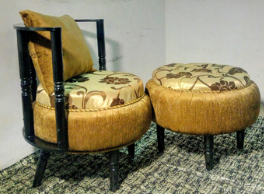 Pearl Recycling is a green innovation social enterprise whose aim is to create job opportunities through the creative reuse of solid waste. With a focus on the production of sustainable eco-friendly furniture and decor made from waste, the brand has trained and empowered 9800 people, sensitized 3 million people, saved 2000 tonnes of solid waste, and donated 418 chairs to schools.

The company basically works towards reducing the effect of climate change on our day-to-day lives, adding a visible impact on the people in their environment.

“We realized that lots of people are not aware that earth temperature gets increasingly influenced through many day-to-day activities.”

Over the years, many have continued to argue that conversations about climate change are simply aimed at manipulating the public. A good example is attempting to convince unenlightened individuals to let go of their cars and settle for public transportation to reduce emissions. Now, for someone who sees a car as a luxury, it would be hard to explain that the carbon dioxide of car emissions are part of the major problems of climate change.

In a similar vein, it is even harder to discourage companies from cutting down trees to make products. Since 2016, an average of 28 million hectares of forests have been cut down every year. Should deforestation continue at this rate, the world’s rainforest will be totally gone in 100 years.

Pearl Recycling’s immediate response to this problem was to create awareness about the effects of burning fossil fuels, and other waste disposal procedures that increase greenhouse effects and global warming. This way, more  people will be aware of their actions and the negative effects it has on the environment.

“The first thing we did was to create awareness about the damaging effect of waste burning and also sensitize against indecent waste disposal in a bid to reduce the amount we burn. We also started a grassroots campaign against indiscriminate waste burning through community vocational training. This allows us to train people in different communities on skills to creatively reuse waste and also discourage open burning of waste,” Olamide explained. 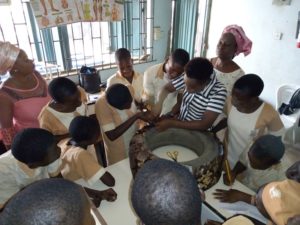 “With more research and development on ways to reuse waste, more opportunities will unfold”

Creative reuse of waste in Africa is still somewhat uncharted territory, and the use of waste for anything other than disposal seems alien.

In Africa, countries like Nigeria generate an estimated 32 million tons of solid waste per year – one of the highest in Africa, and an opportunity to tap into the country’s waste sector. With the proper skills to creatively reuse solid waste, the rate of unemployment is likely to reduce across Africa. It would also serve as an opportunity to generate more funds for the country’s waste sector.

“We believe that creativity is a never-ending ocean and ideas are birthed daily. Pearl Recycling solves the problem of waste through creative reuse and we believe that with more research and development on ways to reuse waste, more opportunities will unfold to increase our eco-product range,” said Olamide.

With a presence in Nigeria alone, Pearl Recycling is tapping into the country’s waste potential, while looking for more opportunities to develop the brand. Through its e-commerce arm, creative eco-products are produced by the team and are sold as a means of generating revenue for the business. Also, the business provides environmental consultancy services to organizations and individuals. 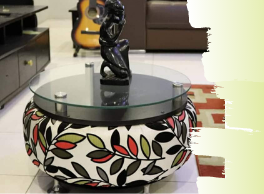 Since 2016, Pearl Recycling has gained recognition home and abroad for its social impact. In 2016, they won the Tony Elumelu Foundation Entrepreneurship Award, and Women in Business, Management and Public Service Impact Investment Award on Recycling. In 2017, they got selected by the United Nations to represent Nigeria at the World Entrepreneurship Investment Forum in Bahrain. In 2018, they exhibited their eco-friendly products in Egypt after been named by the World Youth Forum as one of African Startup Initiatives. In 2019, they got selected to represent Nigeria at the Global Entrepreneurship Summit in the Netherlands.

Is waste really the future?

The World Bank estimates that waste generation will increase from 2.01 billion tonnes in 2016 to 3.40 billion tonnes in 2050. However, there are several creative ways to tap into this potential and put it to good use. A strong example is the case of Morit International School (MIS), a Nigerian school building an intersection between education and sustainability by accepting plastic bottles as school fees. As a solution to the challenge paying actual fees, the school’s proprietor, Patrick Nbamarah came up with this idea.

Another instance is an initiative in Senegal empowering women and promoting sustainability by teaching them to knit with plastic bags. The women pick up trashed plastic bags, wash and cut them into strips, then knit them into bags, baskets, keychains, and other forms of accessories.

Depending on how we handle the issue of waste management, there could be overall impact in more ways than one. It could be the future that is unfit for the next generation because of our approach towards climate change, or it could be the future where the waste industry thrives because we have been able to figure out how to turn the waste – in our oceans, refuse dumps etc – to a profitable industry.