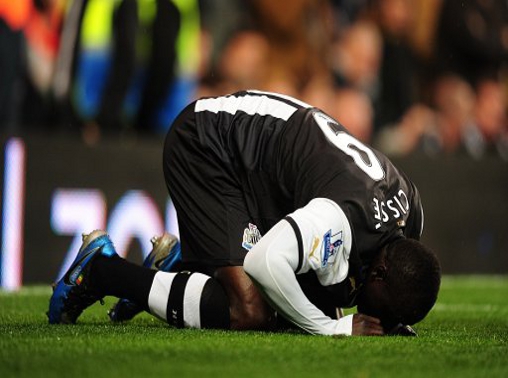 Senegalese international and Newcastle United Striker, Papiss Cisse, has rated his stunning strike against Chelsea on Wednesday night as the best goal in his career.

The Magpies striker scored a brace as Newcastle beat Chelsea 2 : 0 at Stamford Bridge to maintain their surprise push for a UEFA Champions League spot.

While speaking to local evening newspaper, Shields Gazette, Cisse said: “It was a wonderful goal. It was the best goal of my career- I was so happy to score it.”

“When the ball came to me, I was only thinking about scoring. It was an instinctive finish,” Cisse noted.

The 26 year old was bought from Bundesliga side Freiburg for 10 million pounds in January and he has had a remarkable scoring form with 13 goals in 12 games.

The Senegalese insists he is enjoying life in England.

Cisse’s goals have helped Newcastle to the 5th position on the table with 65 points—same number of points as 4th placed Tottenham with the Magpies only behind on goals difference with just two games remaining.

The former Freiburg striker insists his team have worked hard to be where they are. “We believe in each other… We hope to play in the Champions League, and we will work hard to achieve that.”