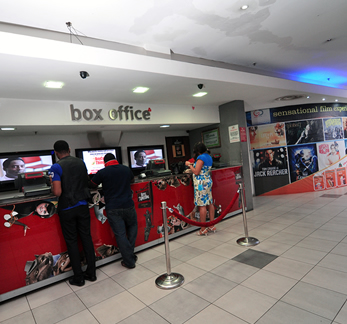 pour of people at cinemas across the country, most of which are the middle class, and by their increasing disposable income, investors in the entertainment industry are combining resources to build cinemas in areas of high demand.

“It takes about N200 million to build a standard cinema, and about N50 million to establish a standard big screen: including rent, rights and technical partnerships” said Harold Igbenusa, a building and project management consultant.

Already, the industry pioneers, Silverbird Cinemas, Filmhouse Cinemas and Genesis Deluxe Cinema, among others, have so far invested over N10 billion ($61.4 million) in the big screen business.

According to Igbenusa, the high return of investment (ROI) in the business seems to be attracting most of the recent investments despite the high cost of building a cinema and the difficulty in securing technical partnership.

Silverbird Cinemas, the largest cinema chain in West Africa, started in 2004, with its first outlet at Victoria Island, Lagos, Nigeria. They currently have over 10 cinemas and 50 screens in Lagos, Abuja, Port Harcourt and Uyo, all in Nigeria, and two in Ghana.

Others include, Genesis Deluxe Cinema, furthering the entertainment bouquet for cinema lovers across the country with its Lagos, Enugu, and Port Harcourt cinemas. The newest entrant: Filmhouse Cinemas with eight cinemas across Nigeria: Surulere, Dugbe Ibadan, Calabar, Samonda Ibadan, Kano, two in Asaba, and others in the pipeline. Filmhouse Cinemas Limited prides itself as a dynamic film exhibition company with a vision to be the foremost cinema brand in Nigeria. They are implementing a strategic development plan to roll out 25 cinemas over a six-year period that commenced in December 2012.

Spelling out the sudden cinema boom, a sales director in a cinema company, Ademola Martins, says besides the upgrade in cinema facilities, the attitude of cinema operators and their business models have changed and that has made cinemas more welcoming to viewers.

A film critic, Clement Onyeka, attributes the blooming cinema viewership to the vast improvement in the quality of Nollywood films over the years, and the fact that moviemakers are now using film premieres in cinemas as a strategy to beat the menace of piracy, as is done in developed countries.

He assures that since most movies released in recent times are high-budget films, the cinemas will have more movie premieres and fresh offerings that will sustain visits to cinema houses across the country.

A staff of Silverbird Cinemas pleading anonymity says “As the cinemas are growing, there should be control to ensure standards are maintained because most people would like to invest in the business just for the profit, not minding the technicality and maintenance concerns”.