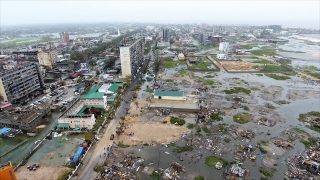 Over $2billion in recovery costs following the impact of Cyclone Idai

The World Bank has called for a global collaboration to raise $282 million which would be used to fund emergency assistance for the victims and countries hit by Cyclone Idai. According to the global lender, the cyclone damaged the infrastructure corridor shared by the Mozambican port of Beira with Malawi, Zambia and Zimbabwe.

This has disrupted regional trade, fuel supplies and the likes and will cost the three countries more than $2 billion. “Early estimates point to over $2 billion in recovery costs for the infrastructure and livelihood impacts of Cyclone Idai on Malawi, Mozambique and Zimbabwe,” the World Bank said in a statement after a high-level round table on the recovery and resilience of the three affected countries.

Cyclone Idai is one of the most devastating storms to ever hit south-eastern Africa; sweeping through Mozambique, Malawi, and Zimbabwe the storm caused a lot of damage destroying almost everything in its path. What began in early March as a tropical depression, soon evolved into a cyclone, affecting about three million people with a death toll of about 1000.

Mozambique is no stranger to cyclones and floods. Each year, the southern-African nation loses an estimated $100 million, about one percent of its GDP, to disasters. According to the World Bank, climate change is expected to cause economic damage of up to $7.4 billion between 2003 and 2050 in Mozambique, with the poor, particularly women and children being the most vulnerable.

According to UNICEF, the needs of women and children are massive, including for healthcare, nutrition, education, sexual and reproductive health services. There are over 130,000 displaced children and more than 75,000 pregnant women affected by Cyclone Idai. 45,000 births are expected over the next six months, 7,000 of which are at risk of life-threatening complications due to the disaster.

The World Bank has previously mobilized resources using existing projects in Malawi and Mozambique to provide support for urgent road repairs, sanitation and hygiene, water supply, food security, and disease surveillance and prevention. Days after the disaster last month, it approved a $90 million grant from the International Development Association in support of Mozambique’s Disaster Risk Management and Resilience Program. It is estimated that the program will benefit over three million people.

The UN has appealed for donations to fund emergency assistance for the next three months with its Children’s Fund launching an appeal for $122 million. “The road to recovery will be long. It is imperative that humanitarian partners are there every step of the way,” said Henrietta Fore, Executive Director, UNICEF.