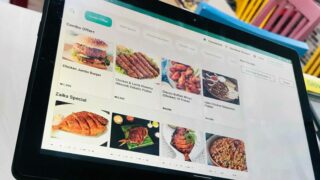 Small food business owners could spend up to four hours a day reconciling transactions while trying to ﬁgure out losses, according to a press release by Orda, a restaurant management startup. Many African food business owners find it hard to integrate local payments, online sales channels, and logistics. And Orda is looking to alleviate that burden by doing the behind-the-scenes work for food businesses across the continent.

CEO, Guy Futi was inspired to start the cloud-based solution after his stint with Jumia Food as general manager, which exposed him to the struggles restaurant owners face in Africa. He became interested in helping restaurants grow and scale their businesses quickly. “I realized a lot of restaurants don’t have the technology, the access to credit lending, and everything it takes to scale,” says Futi in an interview with Ventures Africa.

But Futi’s motivation is not the sole basis for the development of the system. Orda was built after roughly 18 months of collaborative customer feedback, according to the company’s press announcement. “We listened to everything, from how African restaurants reconcile inventory, how customers pay, to how they handle logistics and more. We can conﬁdently say that no one has done as much work as we have to build an end-to-end solution for our food business owners,” says CTO, Fikayo Akinwale.

In places like Nigeria or sub-Saharan Africa, more than fifty per cent of transactions are food-related. According to a Statista report, the revenue for food and delivery in African countries has increased significantly. Kenya and Nigeria are part of the top generators – Kenya generating 36 million dollars and Nigeria projected to generate 2.7 billion dollars from this year. Yet, “when you think about what sector is underserved, it is small restaurants and businesses. Most people are looking at the supply chain and logistics, but the majority of our food ecosystem remains untapped. So we wanted to come in there and give them all the tools they need to succeed,” says Futi

Orda’s full-stack approach allows small and medium-sized businesses to integrate local payments and logistic companies while building inventory management and business analytics. The cloud-based platform is also the only technology solution on the continent that allows restaurants to accept and process their in-store, website, social media, Whatsapp, Jumia Food, Glovo, and Bolt food orders from one interface. Other services include ePos, integrations, and loan solutions, which allow restaurants to manage their entire operation from one place. Point of sale, data, business analytics, and CRM are all available to businesses. “All they would need to do is cook the amazing food people want to buy. Every other thing like the capital reconciliation transactions, Orda takes care of it,” says Futi.

However, there might be challenges. According to a report by Investment Monitor, only 28 per cent of sub-Saharan Africa has mobile internet connectivity. While breaking into a system where internet connectivity is still an issue for most of the population might seem challenging, Orda seems up for it. “It is not a challenge. It is an opportunity. We are digitizing them. So it takes a ramp-up period, so instead of it being a couple of minutes, it ends up being a couple of days,” says Futi. Orda’s solutions are designed cognition to the challenges faced in the African market. Part of this is ensuring their ePos can operate in remote areas with little to no internet coverage.

Managing Partner of LoftyInc Capital, Idris Ayodeji Bello, said, “We loved investing in Orda because it is building the core digital infrastructure for restaurants across Africa. The team has done the hard work of ﬁguring out the core problems that African restaurant owners face and is building a solution that can revolutionize the food business across the continent. LoftyInc is excited to back a solution-focused team like Orda.”

The secured investment will allow Orda to expand its operations across Africa. The company boasts over a hundred businesses and has recently commenced integrations in Kenya. In addition to regional expansion, Orda will be launching its credit and lending integration later in the year. Meanwhile, Orda currently has no plans of operating in other industries.