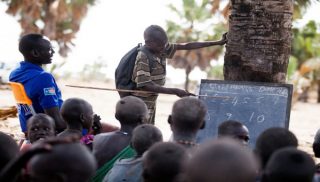 Oranto Petroleum Limited, in partnership with South Sudan’s Ministry of Petroleum, is set to fund an educational program in the country. The program is geared at improving the educational sector and overall socio-economic development in the war-torn African nation.

The program involves the provision of quality training for 25 teachers and 60,000 children across 30 villages in the Eastern Lakes state and would last for a period of 5 years.

“For South Sudan to reach its true place in Africa, we have to invest in education and great students are the result of great teachers and it is, therefore, essential to empower and support teaching professionals throughout this country,” Minister of Petroleum of the Republic of South Sudan, Ezekiel Lol Gatkuoth said.

The educational program organized by Oranto may be targeted at refugees returning to the country, in a bid to support and pave way for more economic advancement and considerable impact for individuals and local communities.

South Sudan has been faced with severe economic challenges including economic instability and poor infrastructure. The country’s educational system for children has deteriorated greatly as a result of conflict and other forms of emergencies, the United Nations International Children Education Fund (UNICEF) revealed.

Since the outbreak of the deadly civil war in 2013, it has experienced a massive migration of over two million citizens to neighbouring countries such as Ethiopia, Uganda and the Central African Republic (CAR). Recently, some of the refugees have returned after a peace deal was signed between President Salva Kiir Mayardit and his ex-deputy, Riek Machar.

“I am thankful to Oranto Petroleum and implore on other oil companies in the country to do the same”, the Minister added.

In line with Oranto’s policy of significantly engaging local human and material resources in all its activities in South Sudan while promoting the development of social infrastructure, the company also plans to fund the construction of two primary schools in two villages.

Oranto Petroleum Limited is one of Nigeria’s privately owned and managed oil companies. It is involved in oil production and exploration, with over 22 oil and gas license in 12 countries.