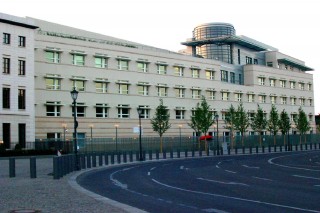 Operation Spartan Vanguard: Ghana’s crackdown on fake US embassy after a decade of operation

A laptop, smart phones, 150 passports from 10 countries, legitimate and counterfeit visas from the United States, South Africa, the Schengen zone, and India; and counterfeit identity documents. These were some of the pieces of evidence obtained by the Ghanaian authorities from the raid of a fake US embassy in Accra.

The fake embassy which has been in existence for a decade was run by individuals from both Ghanaian and Turkish organised crime rings and a Ghanaian attorney who practised immigration and criminal law.

The building, a washed out pink storey building, flew the American flag on specific days of operation, Mondays, Tuesdays, and Fridays, from 7:30 a.m. to 12:00 noon. According to a statement released by the US Department of State, inside the building hung a photo of President Barack Obama and other signs that mimicked a genuine US embassy. But it was not.

The fake embassy advertised their services via billboards and flyers and did not serve walk-in clients. “Instead, they drove to the most remote parts of West Africa to find customers, then shuttle them to Accra, and rent them a room at a nearby hotel.” the statement read.

Besides issuing both fraudulently obtained legitimate visas, and counterfeit visas, services provided by the embassy also included issuance of false identification documents such as bank records, birth certificates, education records, and more, at the cost of 6,000 dollars.

US authorities conducting a broader security operation tagged, “Operation Spartan Vanguard” were tipped off about the fake US embassy, as well as a fake Netherlands embassy also operating in the capital. Further investigation conducted by an assembled team comprising the Ghana Police Force, the Ghana Detective Bureau, Ghana SWAT, and officials from the Canadian Embassy, identified the ringleader of the operation. And discovered two subsidiaries of the fake embassy, a dress shop, and an apartment building, used for operations.

Although several suspects were arrested during the raid, the US Department of States say several more are still at large but the Ghanaian police plan to find them. However, as the investigation and search for the crime groups involved in this case are ongoing, a few questions remain unanswered: How did they operate for so long without being caught? Even though corrupt officials were paid to turn a blind eye to their activities, what about the billboards and flyers? How did everyone miss that? Also, how many people have gotten into the US and other countries using these visas? And would these illegal entrants be tracked down?