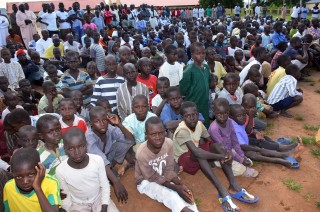 How do 71 trailers of rice for IDPs go missing in the face of a starvation crisis?

It is incredibly disheartening to read reports of Internally Displaced Persons (IDPs) dying of starvation in Nigeria, especially since these are all people who have managed to escape the onslaught by terrorists in the country. More disturbing, however, is the report of 71 trailers of rice meant for the IDPs which ‘magically grew wings’ and disappeared without reaching the bellies it was meant to nourish. This means that, despite the United Nations warning to Nigeria that 50,000 children in the north-east could starve to death this year, the ‘efforts’ of some people in the country are solely focused on bringing this impending disaster to fruition.

According to Médecins Sans Frontières (MSF), between May 23 and June 22 this year, no fewer than 188 people have died mainly from diarrhoea and malnutrition in an IDP camp in Bama, Borno State. Also, more than 1,200 graves, many of them for children, have been dug near the camp in the last year alone. This is just one of the many unreported conditions of camps meant for internally displaced persons in north-eastern Nigeria. Even with verified evidence of the reported conditions of the IDPs, this situation remains very difficult to comprehend, chiefly due to the massive support that has been extended to the affected people in recent times. The IDPs constantly receive donations through the State governments from various private organisations, the Federal Government, religious bodies, non-governmental organisations (NGOs), international donors and several other individuals, yet many people still die from starvation and malnourishment. As a result of this, one is forced to question where all the donations are going, really.

On Sunday, The Guardian newspaper reported the sudden disappearance of 42,600 bags of rice and grains meant for the IDPs in Adamawa State, Nigeria. The grains, which amounted to 71 trailers, were sent to the State by the Federal Government, to ameliorate the hardship faced by victims of insurgency in the State. Two days after the Deputy Governor of the state, Martins Babale, flagged off the ceremony marking the distribution of the consignment, it disappeared into the thin air. The relevant body in charge of the IDPs has since denied any involvement in the anomaly.

“I cannot tell exactly what went wrong with the distribution, because we are the agency that is charged with the responsibilities of taking care of IDPs. But we were not involved in recent exercise, it was done in Abuja; even the sharing formula. Many people are calling my office, bringing complaints, but the only thing we can say is we are not part of the exercise, so we don’t know how the distribution was done and the formula that was used,” the Executive Secretary of the state Emergency Management Agency, Haruna Furo, told The Guardian.

This is definitely corruption in its most desperate and inhumane form. Last week, Ventures Africa reported that the apathy towards victims of Boko Haram is an indictment on every Nigerian, hence, the urgent need for the Federal Government of Nigeria to find an end to this. It is not enough for President Buhari to invite the north-east governors for questioning; reported diversion of aids and siphoning of IDP donations should be probed and those found guilty be penalised, if truly a corruption fight is ongoing in Nigeria. If this is not nipped in the bud now, the North-East Development Commission proposed by the Nigerian lawmakers, aimed at assisting the ravaged area, may only be an epitome of ‘better corruption’ in the embryo.