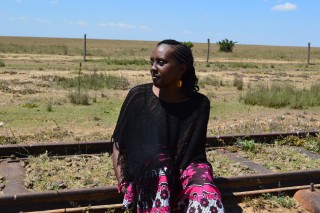 On Wandia Njoya’s ‘Love and revolution.’

Kenyan writer and teacher, Dr Wandia Njoya surprised herself when she fell in love with an authentic African man who loves her and said yes to getting married. For most of her life, she had believed critics who told her she was too vocal and too knowledgeable for a man to fall in love with. She had accepted this, resolving that she wasn’t going to give up her identity to get a husband and that she wouldn’t love herself any less simply because, or even if no African man would. Her reason? The revolution of Africans purely accepting who we are, joys, scars, and all. “I decided that for revolution, I must love myself, even if no African man would.”

But with falling in love and saying “yes” to a proposal came the wedding fever from friends and relatives – not her. She had never been fascinated by weddings. Never had she been lost in the fantasy of a dream wedding as most women have because “I never wanted a wedding day to be the only great day or the best day of my life. I wanted it to be one great day in my life.” Further affirming her unique value and identity, Dr Njoya defied the norm of a white wedding dress. Instead, she opted for an integrated ensemble of denim and kanga custom made for her.

Dr Njoya’s story is beautiful and well written, but more importantly, it raises several issues like feminism, sexism, and stereotypes in African societies. Here is a woman who was severely criticized by society for being too knowledgeable ‘for a man’ to fall in love with. Society has not only created and maintained a stereotype for women but for men as well – the calibre of woman they should fall in love with; the woman without a voice. Because the woman who knows too much speaks too much, they say. I’ve had an experience where a man told me “your problem is you know too much. And it’s not good for a woman to know too much; you’ll scare men away.” Who knew knowledge would someday be defined as a problem? A definition mostly intended for the African woman. Like Dr Njoya said, “Missionaries, philanthropists and politicians often imply that we’re not authentic Africans or authentic African women when we are educated, healthy and fighting for freedom, yet they turn around and fight to save those of us Africans who are actually poor, ignorant, sickly and oppressed, to change them into the educated, healthy and liberated Africans that they will call un-authentic.”

On the other side of the world, issues of sexism and stereotypes mostly surround vocations- media, sports, and the corporate sector. Common instances are the rampant objectification of women in the media. The roles of women presented in the media, from talk shows to entertainment, and news reporting often end up reinforcing the status quo and the cultural stereotype of women as the epitome of beauty, docility and household efficiency. A recent study by researchers at the University of Washington and the University of Maryland shows that even a multinational tech company like Google isn’t innocent of gender bias. There’s also the wage gap issue of women earning 78 cents to a man’s dollar, which is 67 cents for African- American women, and 54 cents for Hispanic women.

In Africa, issues of sexism and stereotypes largely surround marriage. Marriage is the ultimate achievement for African women. Being the CEO of a company, a novel innovator, a wealthy businesswoman, or a widely acclaimed author is never enough. Your validation as a woman is the adoption of a man’s name, and a ring on your finger. As Chimamanda stated in her TEDx talk ‘We All Should Be Feminists,’ females are expected to aspire to marriage and make life choices bearing in mind that marriage is the most important thing. As if the pressure on getting married is not enough, there’s the standard age range within which every female must scramble to say “for better and for worse, till death do us part.” And when you are lucky enough to be married at that age, you are expected to become a baby-making machine for the next five or more years. God help that African woman who gets married and doesn’t succumb to fits of nausea in the first year.

Two months ago, I turned a year older. When my aunty called to give her birthday wishes and blessings, top on the agenda was for the Almighty to send me a man. Actually, this was how she put it, “… abeg do make you bring man come house.” Pidgin for please find and bring a man home quickly. My reply didn’t please her. I know she meant well, but she dampened my mood. I have never been the woman who aspires to marriage. And when I was younger, I definitely went through a phase of thinking something must be wrong with my wiring for not thinking like most of my peers do. Let me be clear, it’s not that I don’t want to be married, I want to, but marriage has never been an ultimate goal for me as it is for most of my peers. Matter of fact, unlike Dr Njoya who I’ve come to admire, I do have a ‘dream wedding’. But my ultimate aspiration is to make a positive difference in this world. And since I am a writer – to better develop my skill, and write stories that will make an impact. However, what I do have in common with the likes of Dr Njoya, is self-love. And no, I am not a narcissist.

Society has painted for women a life in grayscale; an attempt to add a tint of colour is frowned at. So many expectations within a confined space. Women are expected to be great at a lot of things, but only under the umbrella of a man’s home. This is a deeply flawed notion. And quite honestly, I believe it partly accounts for the lack of originality and creativity that we find around us – the number of females who are critical thinkers – women who dare to do. Because the energy of women are channelled into thoughts of getting hitched to a (rich) man, and making babies. The end result is the increasing number of ‘baby mamas’ in societies because women have been taught – directly or otherwise – to be parasites, to be desperate. And that their value can only be affirmed by the backing of a man. In the haste to be married at a certain age, babies have become the bait. Yet people wonder why the divorce rate is on the increase, even in Africa.

Women like Dr Wandia Njoya breaks the stereotype, setting an example for African women. She did not deny her identity to fit into the flawed notion of ‘marriage makes a woman.’ Her resolve to love and be true to herself brought her, ‘her beloved’, as she fondly calls her husband. The truth is that a woman living in self-denial will barely find herself a worthy partner? Putting up a character to win a man’s heart is shooting oneself in the foot. It is setting up the union that you so desperately want, for failure. Even the greatest actor steps out of character at the end of a take. So let African women rise, and join this revolution of self-love, where our identities need not be suppressed to grease the ego of men who are intimidated by knowledgeable women. Those are exactly the kind of men we don’t need.

Dr Wandia Njoya is currently a senior lecturer and the Head of Department, Language and Performing Arts at Daystar University Kenya.  She holds a Ph.D and an MA in French, from Pennsylvania State University and Kenyatta University. This phenomenal woman is passionate about gender, cultural and political issues of Africa, particularly as they are reflected in literature and film. She got married two weeks ago on the 30th of July to Chris Lymo, who is equally an author and blogger. “I look forward to writing together and making people’s lives better,” she said during the wedding.