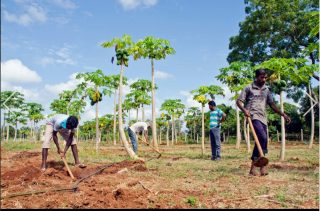 In the last decade, Zimbabwe has had to deal with the issue of food insecurity, as it ranks fourth on the list of the highest food-insecure countries in the world. According to Zimbabwe’s Vulnerability Assessment Committee (Zim VAC) report, over 60 percent of Zimbabwe’s population faces food insecurity, with about 5.5 million in rural areas and 2.2 million in urban areas.

This situation can be attributed to high levels of food importation, periodic droughts, poor rains and erratic weather patterns, which has led to poor agricultural production. However, Olivine industry seeks to tackle the problem by increasing its domestic and regional production capacity and food supply in the country.

Last week, the Board of Directors of the African Development Bank Group approved a $8.25 million corporate loan to Olivine Industries Limited to support the company’s food production expansion plan in Zimbabwe.

The newly approved loan will enable Olivine to construct new processing plants for margarine and tomato sauce as well as install upgraded machinery with advanced technologies. It is also an opportunity for the bank to deepen effective private sector intervention in a transition state, while also promoting the “Feed Africa” agenda that forms part of the bank’s High 5 strategic priorities.

Once the company’s production reaches an adequate level, this project can potentially support 200 to 300 local farmers through Olivine’s corporate farming model to be developed in the near future.

“With this transaction, the Bank will provide long-term hard currency financing in the Zimbabwean market, and create a strong demonstration effect to both commercial and development finance institutions, which will encourage investments in agribusinesses in Zimbabwe,” said Atsuko Toda, Director, Agriculture Finance and Rural Development at the AfDB.

According to Toda, Olivine presented a unique opportunity for the bank to participate in rebuilding agricultural value chains in Zimbabwe, thereby creating jobs, improving food security and nutrition while reducing the country’s dependence on food imports.

However, Zimbabwe has been charged for abusing human rights and has been placed under sanctions by the United States (US) and the European union (EU). This has limited the country from receiving financial assistance or economic transactions with foreign investors and financial institutions.

Sanctions placed on the country have badly affected the economy. For instance, restricted access to credit markets has forced the country to fend for itself, resulting in a build-up of external debt and a declining economy.

Nevertheless, financial institutions can take a cue from AfDB by indirectly rendering financial aid to the country through various key businesses. Zimbabwe is in dire need of financial aid and restructuring, failure to take action quickly may spell doom for its rapidly declining economy and the country as a whole.