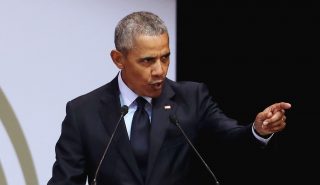 Obama blames African governments for brain drain on the continent

In his first high-profile speech since he stepped down as U.S. president last year, Barrack Obama was once again critical of African leaders. At a memorial held in South Africa to celebrate the centenary of the birth of late anti-apartheid South African leader Nelson Mandela, Obama blamed African leaders for the increasing brain drain on the continent.

“If we have African leaders, governments and institutions which are creating a platform for success and opportunity, then you will increasingly get more talent wanting to stay,” Obama said. “Once you reach a tipping point, not only will you stop the brain drain, then it will start reversing.”

During his last trip to Africa in 2015 when he addressed the African Union in Ethiopia, Obama criticized the ‘strongman’ syndrome among many of the leaders on the continent, saying “Nobody should be president for life.” Three years later, and his views about African leadership haven’t changed.

Government persecution, conflict, violence from religious extremism, broken down institutions, lack of social infrastructures, disdain for human rights and authoritarian rule in many African countries have been some of the triggers of migration of both educated and uneducated Africans from the continent. While stories of African migrants crossing the Sahel into North Africa under the harshest conditions to get to Europe illegally have been well documented so far, there has seemingly been less focus on the migration of labour happening on the continent.

In a situation former South African president Thabo Mbeki described as ‘frightening,‘ the movement of highly qualified Africans to Europe and the US is occurring at an alarmingly fast pace. A sector where the effect of the brain drain can be felt is the continent’s health sector.

A recent poll conducted by N.O.I. polls in conjunction with the Nigerian Health-watch showed that Nigerian doctors are moving to western countries in droves to better systems like the U.K.’s National Health Service (N.H.S) which hires at least 12 new Nigerian doctors every week, being the main attraction.

88 percent of those remaining are hoping to leave soon, with the United States, United Kingdom and Canada being their destinations. The regular brain drain of Nigerian doctors has increased the Doctor-patient ratio from 1:4000 to 1;5000, indicating that there is a ticking time bomb in the country’s health sector.

In Kenya, 30-40 percent of about 600 doctors who graduate annually leave the country after a year, further affecting the country’s Health system negatively. Uganda has “less than 5,000 doctors and 30,000 nurses for a population topping 35 million people.” Nigeria, Kenya, and Uganda make up the top 3 African nationalities employed by the NHS.

It is also estimated that more African scientists and Engineers live in the U.K. and the U.S than in anywhere in the world, even in Africa. 10 percent of the continent’s Information Technology professionals and 20,000 Academics trained in universities across Africa have emigrated. More African students continue to choose American, English, and Canadian institutions because they offer more opportunities than their native countries.

In his speech at Mandela’s memorial in South Africa, Obama called the brain drain a “real issue,” and encouraged African youths to stay home to develop their countries, while also admonishing governments to support them. However, the numbers above prove that while the brain drain is a systemic problem, it may not end soon because the same precursors that lead to brain drain are getting worse.

Obama’s new non-governmental organisation, the Obama Foundation is dedicated to training young African leaders to solve the continent’s challenges and help keep the African youth on the continent to solve its challenges. However, the training can only go so far, especially on a continent that has the youngest population globally, but the oldest leaders, and where the political system is seemingly rigged to discourage the average African youth from engaging in policy-making.