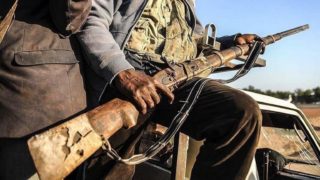 Oando Webinar Series 6.0 – The state of insecurity in Nigeria; the tipping point

Oando PLC, Nigeria’s leading energy solutions provider, is set to host the 6th edition of its quarterly webinar series themed, ‘The State of Insecurity in Nigeria: The Tipping Point’, in partnership with the Nigerian Economic Summit Group (NESG) and Ventures Africa.

Nigeria is faced with an unprecedented security crisis, from kidnapping to extremist insurgencies to clashes between herdsmen and farmers, to name a few; almost every corner of the country is being hit by violence and crime. Some have attributed the surge in insecurity to the staggering rate of poverty across the country. Boko Haram is expanding into new territories in the northeast and fueling its extremist ideologies by taking advantage of the country’s security challenges as well as the poor, unemployed and uneducated masses. According to the United Nations, as of the end of 2020, conflict with the group had led to the deaths of almost 350,000 people.

One of the panellists, Dr. Olajumoke Ayandele authored an article titled, Why Integrating Non-Military Actors in Security Strategies Can Stabilize the Lake Chad Region, in which she stated, “Since 2009, Boko Haram and its splinter group, the Islamic State West Africa Province (ISWAP), have remained largely responsible for militant jihadist group activities in the four countries bordering the Lake Chad: Chad, Cameroon, Niger and Nigeria. The violence from the two groups has deepened instability, stifled economic growth and engendered humanitarian concerns”.

Violent clashes between herdsmen and farmers have exacerbated over the years. The death toll resulting from these clashes continues to see an upward trajectory as herders move further South looking for grazing ground. A report titled, “Fulani Militias’ Terror: Compilation of News (2017-2020)” revealed that herdsmen were responsible for 654 attacks, killed 2,539 and kidnapped 253 people in Nigeria between 2017 and May 2020. Continued tensions have led some state Governors to ban open grazing, which has in turn led to friction with the Federal Government.

Banditry is also on the rise with more than 1,000 students abducted from schools since December 2020, many only released after thousands of dollars were paid in ransom. A New Humanitarian article titled The Longshot Bid to End Rampant Banditry in Nigeria’s Northwest, stated, “as of January 2021, over 200,000 people in North-West Nigeria had been displaced from their homes due to the insecurity posed by insurgent and banditry activities.”

According to the World Bank’s 2021 Nigeria Development Update (NDU), the country’s economic growth is being hampered by increased insecurity, food inflation, and stalled reforms. Furthermore, the incessant herdsmen attacks on farming communities have caused the Nigerian agricultural sector unquantifiable loss, resulting in food import expenses exceeding revenue generated from exports by 395.44 per cent.

The above are just a few examples of the different security issues plaguing the country. On a larger and more disconcerting scale, the insecurity has seen Nigeria rank 146th least peaceful country among 163 independent nations and territories, according to the 2021 Global Peace Index. The 2021 Fragile States Index report ranks Nigeria as the world’s 12th most fragile nation. Nigeria is Africa’s eighth least peaceful country, trailing South Sudan, Somalia, the Democratic Republic of the Congo, Libya, the Central African Republic, Sudan, and Mali.

In February 2020, a Thisday article on Localizing Security, Safety in Africa, quoted panellist, Dr. Patrick Agbambu, thus, “I have said that no meaningful development can take place in Africa or any part of the world if security is not taken care of. The biggest challenges we have in Africa is the issue of security and I believe that once it’s resolved, development will begin”.

It is against this backdrop that the 6th edition of the Oando webinar series will hold. The panellists, with combined industry experience of over thirty years, will examine pivotal issues surrounding security in Nigeria such as the effects of COVID-19 on insecurity, the role of the government in alleviating the current crises, possible international intervention and collaboration, fundraising and deployment of artificial intelligence to improve security, to name a few.

The country’s multifaceted insecurity challenges continue to have a devastating impact on all aspects of life for Nigerians, regardless of age, gender, or class; a reminder that we all have a stake in contributing to the restoration, stability, and optimal functionality of our nation. This webinar, therefore, presents an opportunity for all concerned citizens to join in the conversation to identify opportunities for not just the government but organizations and individuals, to play a role in creating a more secure nation.

Oando PLC is Africa’s leading indigenous energy company operating in the upstream sector, with interests in the downstream. Oando PLC is listed on the Nigerian Stock Exchange and is the first African company to have a cross-border inward listing on the Johannesburg Stock Exchange.

COVID-19 has brought to the fore an increased appetite for information and the realization that success can only be achieved if there is cooperation among people, businesses, and countries. Against this backdrop, Oando created a bespoke webinar series as a platform for engaging discourse among thought leaders from around the world, including public sector officials, senior decision-makers, business leaders, research analysts, and subject matter experts. Now in its sixth edition, the Oando Webinar Series is targeted at senior executives across all sectors.