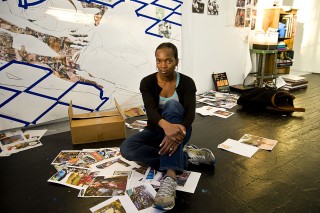 Last week, Nigerian artist Njideka Akunyili Crosby set a new auction record sale for herself at the Sotheby’s Contemporary Art Evening Sale in New York when one of her works, “Drown,” sold for over a million dollars. Reports say it was triple the high estimate of 200,000 to 300,000 dollars in the company’s African Contemporary Art Evening sale, with no fewer than 11 bidders competing for the work.

The work “Drown” is a characteristic self-portrait of the artist with her Texan husband, a reflection of her reality of a transcultural and transracial identity. As a mixed-media artist, Njideka’s work are always a blend of painting, drawing, and collages of photos, newspapers, and fabrics depicting Nigerian culture, pop culture, and politics. A good number of them being intimate self-portraits like “Drown”, while others bear the narrative of domestic life.

As with many other African artists, Njideka’s art has gained widespread acclaim and her latest record sale is only an attestation to the increased global recognition and value of contemporary African art. In a 2015 report on the increasing demand and investment in African art, Nigeria’s largest private art collector, Prince Yemisi Shyllon, who’s been collecting art since the 70’s said he has witnessed the monetary value of African art go from zero to millions.

“When I started collecting art as an undergraduate at the university in the mid1970s, it had virtually no value. You could buy a piece of good art for 20,000 Naira (about $64 currently). Today it would sell for millions,” he told CNN.

In an interview with Ventures Africa last year, Victor Ehikhamenor, one of Africa’s most innovative artists stated matter-of-factly, “Nigerian art is being recognised all over the world, we are going places now, the international media have been talking about it… serious value is coming to the Nigerian market right now.” He was absolutely right.

The rise of African art has been attributed to a number of factors, the number one being the increasing wealth of the African middle class, a result of the general growth of many economies. Given the fact that a significant number of the buyers of African art are Africans, mostly Nigerians and South Africans. “Where there is money, there is art,” writes Julie Baumgardner for Artsy on the hard-won rise of contemporary African art to the main stage of the art world.

Ugochukwu-Smooth C. Nzewi, a Nigerian art historian and curator told Baumgardner that the value of art is often “home generated”; an increased interest and appreciation of art in their home countries ultimately translates to an increased global interest and value. The surge in the establishment of art galleries, museums, and auction houses in cosmopolitan cities like Lagos, Johannesburg, and Nairobi is a testament to Nzewi’s opinion. Not to mention the proliferation of organised art festivals like the recently concluded ART X Lagos.

Whatever the reason for the increased awareness and global recognition, of contemporary African art, we hope that it defies the definition of a “trend” and that more African artists like Njideka continue to receive the visibility that they deserve. Coupled with an ever increasing market value for their works of course.