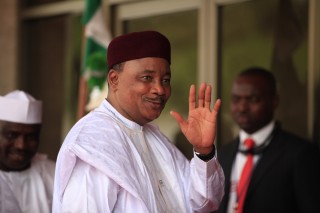 On Monday, 8 February 2021, the Mo Ibrahim Foundation awarded Mahamadou Issoufou with the 2020 Ibrahim Prize for Achievement in African Leadership for driving the country to the “path of progress.” Issoufou is the outgoing president of the Niger Republic, having paved the way for a democratic process in the country.

He is awarded the leadership prize for good governance, democratic election and respect of terms limits. According to a report, Issoufou faced “seemingly insurmountable challenges”, ranging from deep poverty to armed rebellion and desertification.

In a statement, Festus Mogae, Chairman of the Award Committee and Former President of Botswana mentioned that despite the enduring problems the country faced, “Issoufou has led his people on a path of progress.”

Further commenting, Mogae noted that the number of people living below the poverty line has fallen to 40 percent, from 48 percent a decade ago. “While challenges remain, Issoufou has kept his promises to the Nigerien people and paved the way for a better future,” he said.

Mahamadou Issoufou took over the reins of power in 2011 and has ruled for two terms. He is leaving power by respecting the constitution limiting him to two terms in office.

The Ibrahim Prize for Achievement in African Leadership is an annual prize awarded to a former African executive head of state or government on criteria of good governance, democratic election and respect of terms limits. The award comes with a $5 million initial payment, plus $200,000 a year for life. It is believed to be the world’s largest prize, exceeding the $1.3m Nobel Peace Prize.

Established in 2007, the Prize celebrates excellence in African leadership and since its inception, only eight African leaders have won it. On the other hand, the Mo Foundation was founded by Mo Ibrahim, a Sudanese billionaire businessman and philanthropist, who founded the telecommunications company Celtel International in 1998.