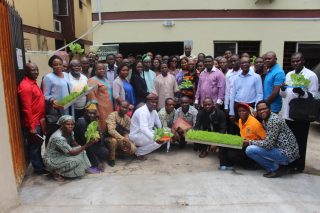 In May 2016, the invasion of the Tuta absoluta moth was all Nigerians were talking about. The pest, also known as the tomato leafminer, and nicknamed “tomato ebola,” ravaged hundreds of tomato farms in northern Nigeria, where most of the country’s tomato crops are located. The episode led to an increase in the price of tomatoes, an important ingredient in local dishes, by a record 400 percent across the country.

While Nigeria is sub-Saharan Africa’s biggest tomato producer, generating roughly 1.5 million tonnes annually, its production is not enough to satisfy the national demand – around 2.45 million tonnes per year. Even before the moth struck, the tomato industry needed to find a way to ensure an ample supply.

The pest invasion came on top of pre-existing issues, such as an annual loss of 900,000 tonnes of tomatoes caused by moving produce to faraway urban markets on bad roads, or the lack of a storage system for harvested produce. Drought in parts of northern Nigeria, exacerbated by creeping desertification from the Sahara, has also created problems for tomato farmers. The southern states even ran out of tomatoes for a period of time.

But Alhaji Bello, a fish farmer in Ibadan, 130 km from Lagos, saw these challenges as an opportunity. He had been trained at B.I.C. Farm Concepts, a Lagos-based agribusiness company that specializes in aquaculture, hydroponics, and training small-scale farmers. Bello’s transition to hydroponic farming, a soilless technique for growing crops in nutrient solutions, was seamless. “I was attracted to it because I always had wastewater from the fish farm,” he said, “so instead of throwing it away, I decided to use it to grow fodder.”

Bello combined fish farming with aquaponics, a form of hydroponics using water that has been used to cultivate aquatic organisms. The water from his fishpond is directed to a hydroponic system, where bacteria break fish excretion down into nutrients for plants, cleaning the water and sending it back to the pond.

This system has allowed him to grow tomatoes, lettuce and peppers in a space measuring 8×10 metres, and to achieve a greater tomato yield using fewer resources than traditional methods. “Hydroponics has helped me solve the wastage problem. It supports small-scale farming,” he explained. “My yields are higher. In soil, a tomato plant produces up to 10 kg of fruit, whereas with hydroponics, it yields up to 50 kg.”

Hydroponics also helps reduce the need for water. During field irrigation, water must thoroughly soak the soil in order for nutrients to reach the crops’ roots, and a huge amount is lost in the process. With hydroponics, irrigation goes directly to the roots. A single tomato plant needs less than two litres of water per day using this method, whereas a tomato plant grown with soil requires up to 20 litres of water per day.

Debo Onafowora, who founded B.I.C. Farm Concepts 12 years ago, said Bello is just one of 5,000 Nigerian small-scale farmers his company has trained in hydroponics farming. Many are young men – Onafowora calls them “agripreneurs.” B.I.C. hopes to train 100,000 Nigerian youngsters by 2025, in a bid to solve Africa’s agribusiness problems through small-scale farming.

With climate change, desertification is threatening Nigeria’s north, and shorter rainy seasons are making it more difficult to grow food. In contrast, near the coast in southern Nigeria and the country’s rainforests, rainy seasons are getting longer and more intense. River settlements are flooding, rendering much of the land unfit for farming, and destroying stored food.

Nigeria’s population, nearly 200 million people today, is expected to grow to 400 million by 2050. The country must have adequate conditions for crop growth in order to sustain its citizens. “With hydroponics, we use at least 80 percent less water and 90 percent less land, and there’s less deforestation,” Onafowora said. “People cut down forests to grow food, which contributes to climate change. You don’t need to destroy forests to grow food.”

Installing a fully functioning hydroponics farm requires a certain amount of dedication and money. “Set-up costs two million naira (about USD 5,500) for an 8×30-metre space,” Bello cautioned. In a country where more than 60 percent of the population live on the equivalent of around two dollars per day, that’s a steep price to pay.

However, the many advantages of soilless farming make it a worthwhile investment. By growing cattle fodder off the fields, hydroponics can even offer a potential solution to the frequent violent clashes between Nigerian farmers and herdsmen over arable farmland that is disappearing due to desertification.

Universities are introducing the technique to their curriculums. A hydroponics department will soon open at Landmark University, in southwest Nigeria, to teach young Nigerians about soilless farming early in their careers – providing them with the skills to fight both climate change and food shortages in the future.