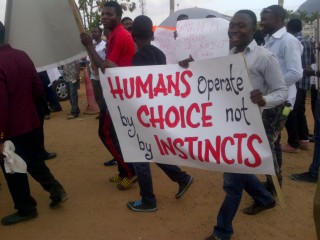 Respect for fundamental human rights and freedom is a major feature of any democratic state, yet, abuse of human rights is becoming more rampant in Nigeria. Recently, several accusations of human rights violation have been leveled against entities within the government.

Human rights protection is enshrined in the Nigerian constitution. Nigerian politicians misuse the power of their offices to infringe on the human rights of the citizens, thus making the country more hostile to journalists, civil servants, religious groups, and others.

Here are recent cases of human rights abuse in Nigeria:

On Thursday, a Nigerian blogger, Jamil Mabai, based in Katsina, spent his fourth night in detention after he was arrested by the Nigerian Police Force in Kaduna. Mabai was arrested on the allegation of criticizing the Katsina state government led by Aminu Masari.

According to Premium Times, Mabai in his post condemned the state’s government purchase of 3,000 coffins for mosques that cost about N40,000 each. The report stated that Mabai questioned the rationale behind buying of coffins while the state government still owes civil servant salaries. Mabai, on his twitter handle, said “What have we done to deserve this? Why will a government purchase coffins with public money?” 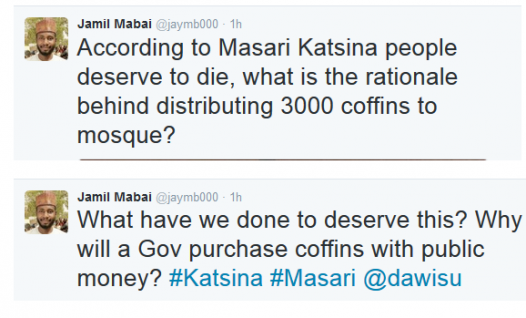 Mabai has done nothing wrong to deserve his arrest. He only exercised his right to freedom of expression as a citizen of Nigeria. Mabai’s post on the wasteful spending of Kastina’s government agrees with Section 39(1) of the 1999 Nigerian Constitution which states that “Every person shall be entitled to freedom of expression, including the freedom to hold opinions and to receive and impart ideas and information without interference.” So, on what legal ground was Mabai detained?

It is appalling that the judicial arm, which should objectively interpret the law, is also being political. This makes Nigeria vulnerable for ordinary citizens. This is evident in the ruling of the magistrate court in Katsina on Thursday, where the judge ordered that Mabai should be further detained.

Kano orders police to deal with Civil Servants who protest

In a statement released by the Public Relations Officer (PRO), Office of the Head of Service, security forces were ordered to deal ruthlessly with any civil servants that engage in illegal protest. The government said that aggrieved workers should direct their complaints to the proper channel and never engage in protest.

If memory serves me right, and it does, trade unions and labour unions have the right to stage a peaceful protest, make their demands as well as relay their grievances. These are the dividends of democracy and Nigerians should not be robbed of their rights. Civil servants have wives and children that depend on them for survival. What have they done wrong by requesting their salaries? The state government should do the needful if they don’t want protests within the state.

A few weeks ago, the State Security Services arrested a blogger, Emenike Iroegbu, in Abia state. A human rights lawyer, Inihebe Effiong, noted that Emenike, who publishes Abia Fact newspaper, has been constantly harassed by the officials of Abia state government over his publications. He said records show that Abia state officials are not comfortable with Emenike’s publication.

While the state government denied its involvement, Emenike’s wife confirmed he was arrested by the SSS. This event indicates the height of human right abuse in Nigeria.

Recently, Amnesty International (AI) report stated that SARS, which is saddled with the responsibility of protecting human lives and properties, is perpetuating crimes and corrupt practices. AI’s report revealed that SARS engages in human rights violation in different parts of the country. The agency brutally tortures suspects until they pay bribes or make confessions.

Damian Ugwu, Nigeria’s researcher for AI said, “Our research has uncovered a pattern of ruthless human rights violations where victims are arrested and tortured until they either make a ‘confession’ or pay officers a bribe to be released.”

We are no longer in the military era, we are in a democracy now

In the Military era, Nigerians live in fear; then, people dare not criticize the government. Pressmen were jailed and killed. The famous Nigerian journalist, Dele Giwa comes to mind. He was killed during the regime of General Ibrahim Babangida a mail bomb two days after he was interviewed by the State Security Service (SSS).

Today, this harsh condition is finding its way back to the Nigerian society. Human rights abuse heightens and citizens are more fearful for their lives. Freedom of speech is under threat in various part of the country and security agents use guns to intimidate people.

Nigeria is a democratic state, citizens have their rights to freedom of speech, the right to life, amongst others. These rights should be respected at all time.