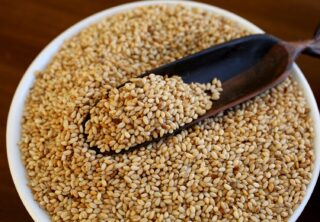 Nigeria’s sesame export has a potential market value of $1.5 billion

Sesame topped the list of agro-export commodities in Nigeria, and the country has long been one of the top sesame seed producers. According to the Food and Agriculture Organization Statistical Databases, Nigeria is the world’s seventh-largest producer of sesame (FAOSTAT). The cash crop has the potential to bring in $1.5 billion for the country if properly maximized.

Sesame seeds come from a flowering plant primarily grown in Northern Nigeria due to the seed’s drought resistance. These seeds are in high demand due to their nutritional properties, such as vitamins, minerals, fibre, protein, and healthy fat. It has a high oil content of about 44 to 60 per cent. Aside from that, it has a plethora of health benefits and is widely used in baking, medicine, cosmetics, and animal feeds.

Sesame seed consumption was valued at USD 6559.0 million in 2018, with a CAGR (Compound annual growth rate) of 1.7 per cent projected to reach USD 7244.9 million by 2024. According to Mr. Ojeifoh, “reports indicate that global demand for the seed is expected to grow at a compound annual growth rate of 4.2 per cent between 2018 and 2024.” Ojiefoh said Nigeria is expected to tap into global demand due to its landmass and the fact that sesame is drought resistant and requires minimal fertilizer to grow. This makes it cheaper to cultivate than other crops.

He also urged farmers to enter the agro-business export commodity market by growing cashew and sesame for export production. He stated that he would distribute 55,000 cashew seedlings and 100 sesame seeds to farmers in his senatorial district to begin the process of making Edo an agricultural export state.

FACAN has devised a four-year master plan to inject 1 million cashew trees and 2,000 tonnes of sesame seeds into the state’s economy each year. With the support of the state government and the collaboration of the private and organized sectors, this is expected to translate into a minimum of N8 billion within five years.

Sesame seeds exported to China, Japan, and Turkey were valued at N23.1 billion, N8.3 billion, and N3 billion in Q1, 2021, respectively, but fell to N7.14 billion in China and N7.28 billion in Japan in Q2, 2021. After fermented cocoa beans and cashew nuts, it was the third most traded major agricultural product. One reason for the decline could be the state of Nigeria’s crisis-ridden northern region, where it is primarily grown. Many farmers have been displaced as insecurity has increased.